The HOMEOPATHY RESEARCH INSTITUTE (HRI) – yes we did discuss its activities before – has just published an ‘update’ on clinical trials of homeopathy. Let me show it to you:

We are pleased to share the results of a recent collaboration with Dr Robert Mathie to update his analysis of randomised controlled trials of homeopathy.

When considering the balance of positive, negative and inconclusive studies, it is interesting to observe the following shifts in the evidence base for homeopathy over this 5 year period: 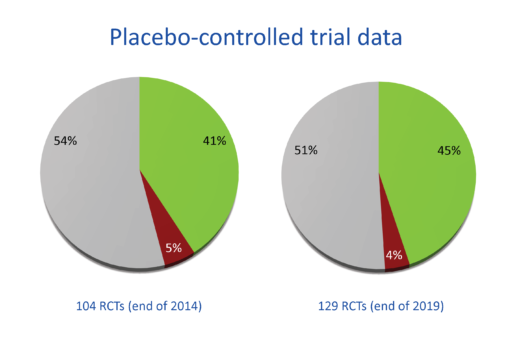 Me too (but only about the profound ignorance of the HRI)!

One could now point out that the ‘pee counting’ method of reviewing clinical trial evidence is nonsense and leads almost invariably to irrelevant findings. All the positive trials could, for instance, be methodologically invalid, while the negative are rigorous. But this is not even necessary. The triumphant update can be invalidated much more easily.

All we need to do is to remind ourselves of what clinical trials are.

Simply put, they are experiments that test a hypothesis, to be precise, they test the ‘null-hypothesis’: the experimental therapy generates results that are not different from those in the control group. Depending on the data, the null-hypothesis must then be either rejected or accepted by the results of the clinical trial. If it is rejected, the therapy seems to be better than placebo. If it is accepted, the therapy seems to perform just like a placebo.

THERE IS NO SUCH THING AS NEITHER REJECTING NOR ACCEPTING!

The results can not say: “We like the null-hypothesis just as much as we dislike it.” Clinical trials always give a YES or NO answer.

This means the category of ‘inconclusive trials’ is entirely an invention of homeopaths and similar wishful thinkers. In their interpretation, it covers those trials where the null-hypothesis was accepted, while the ‘negative trials’ are studies where the control group had better results than the patients treated homeopathically. But trials that accept the null-hypothesis are negative!

So, what does the HRI’s ‘pee-counting’ update really show?

It reveals that, of the 221 RCTs of homeopathy, 45% are positive, i.e. they suggest that homeopathy was better than the control intervention. That is a sizable percentage, but we might ask how reliable these studies were, what control treatments they employed, and whether they all truly used homeopathy (I know, some used isopathy and some employ homotoxicology, for instance).

The majority of the 221 RCTs, however, are trials where the null-hypothesis had to be accepted. These are the studies failing to show that homeopathy works. In other words, the HRI’s triumphant ‘pee-counting’ update confirms what we have pointed out as nauseam for years:

THE MAJORITY OF THE EVIDENCE ON HOMEOPATHY IS NEGATIVE.