Homeopathy for canine oral papillomatosis: a ‘proof’ that homeopathy works?

If you thought that lousy research in so-called alternative medicine (SCAM) is confined to human medicine, you were wrong. The papers published in veterinary medicine is just one of many examples to suggest that it is, in fact, even worse. Take, for instance, this study of homeopathy.

This Indian study was conducted to evaluate the ameliorative potential of homeopathic drugs in combination (Sulfur 30C, Thuja 30C, Graphites 30C, and Psorinum 30C) in 16 dogs affected with oral papillomatosis which had not undergone any previous treatment. Papillomas are benign epithelial tumours caused by infection with species-specific DNA papilloma-viruses. They tend to disappear within 6-12 months.

Dogs affected with oral papillomatosiswere randomly divided into two groups, namely, homeopathic treatment group (n=8) and placebo control group (n=8). The homeopathic combination of drugs and placebo drug (distilled water) was administered orally twice daily for 15 days. The 4 homeopathy drugs were used in the 30C potency and given orally at 2 drops per 5 kg body weight. The clinical evaluation in both groups of dogs was performed by the same investigator throughout the period of study (12 months). All  dogs were clinically scored for oral lesions on days 0, 5, 7, 10, 15, 20, 25, 30, 45, 60, 90, 120, and 150 after initiation of treatment. 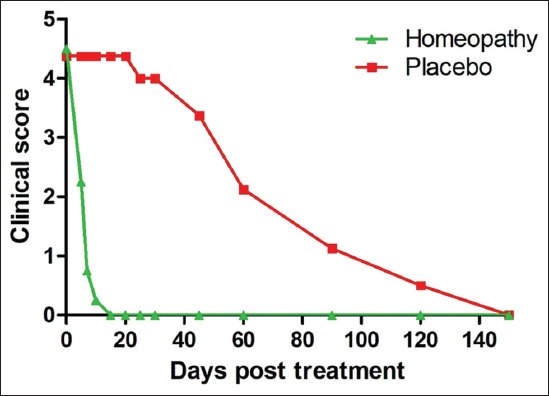 The graph says it all. Very rarely is any medical treatment as effective as to produce such impressive results.

So, are we witnessing a scientific sensation?

Is this the breakthrough homeopaths have been waiting for?

Should the Nobel committee be informed?

A group size of 8 is underwhelming, to say the least. It is not sufficient to generate a reliable result. The results, even if true, ‘prove‘ nothing other than the authors’ ignorance of research methodology.

7 Responses to Homeopathy for canine oral papillomatosis: a ‘proof’ that homeopathy works?