When I conduct my regular literature searches, I am invariably delighted to find a paper that shows the effectiveness of a so-called alternative medicine (SCAM). Contrary to the impression that I might give to some, I like positive results as much as the next person. So, today you find me pleased to yet again report about one of my favorite SCAMs.

The purpose of this systematic review was to evaluate the effectiveness of manual lymphatic drainage (MLD) in breast cancer-related lymphedema (BCRL) patients.

The authors concluded that the current evidence based on the RCTs shows that pain of BCRL patients undergoing MLD is significantly improved, while our findings do not support the use of MLD in improving volumetric of lymphedema and quality of life. Note that the effect of MLD for preventing BCRL is worthy of discussion.

Lymph drainage is so well-established in cancer care that most people would probably consider it a conventional treatment. If, however, you read for which conditions its inventor, Emil Vodder, used to promote it, they might change their minds. Vodder saw it as a cure for most illnesses, even those for which there is no plausibility or good evidence.

As far as I can see, lymph drainage works well for reducing lymph edema but, for all other conditions, it is not evidence-based. And this is the reason why I still categorize it as a SCAM.

Yesterday, I had the honour and pleasure to present to the UK press my new book entitled ‘ALTERNATIVE MEDICINE, A CRITICAL ASSESSMENT OF 150 MODALITIES’ (see also my previous post). The SCIENCE MEDIA CENTRE had invited me to do a ‘media briefing’ on the occasion of its publication. I did this by outlining the background around so-called alternative medicine (SCAM) and explaining the concept of the new book which essentially is – as its title indicates – to provide concise and critical assessments of 150 modalities.

In the course of my short presentation, I mentioned the following exotic modalities in order to show that my book goes beyond the ‘usual suspects’ of acupuncture, chiropractic, etc.:

As it turned out, the journalists present found the BERLIN WALL remedy the most fascinating aspect of my talk. And this is clearly reflected in today’s articles covering the event: 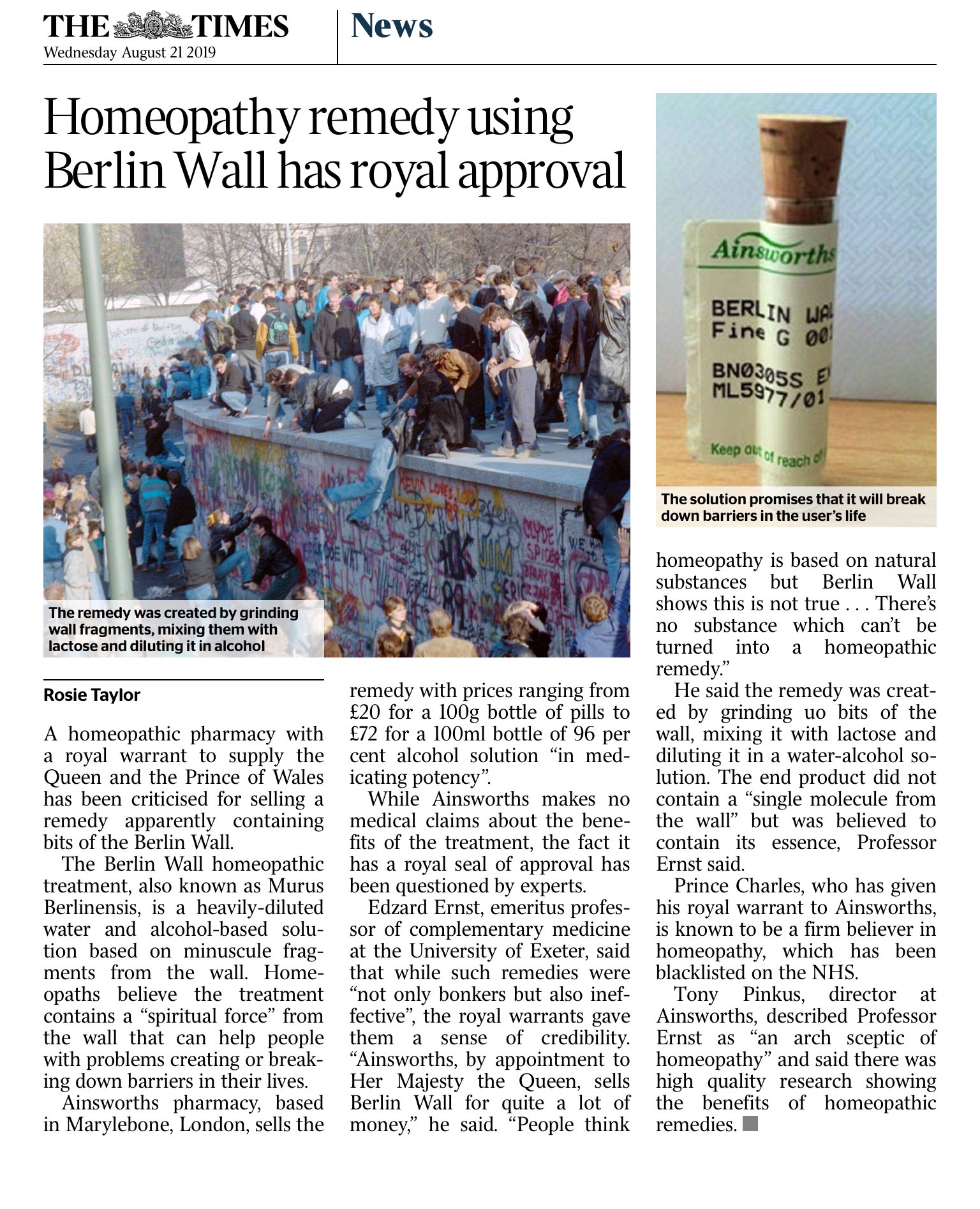 The DAILY TELEGRAPH published an article much in the same vein, and so did THE SUN and the EXPRESS (not available on line). The only UK newspaper I have seen so far going beyond the Berlin Wall topic is THE DAILY MAIL. The paper mentions several other so-called alternative medicines (SCAMs) that consumers need to be protected from, in my view.

Interestingly, none of the articles mentioned that my new book is not an exercise in debunking. During my presentation, I made the point that several of my assessments of 150 modalities do arrive at positive conclusions for therapies that demonstrably generate more good than harm.

I also tried to point out to the journalists that SCAM includes a range of diagnostic techniques. None of them are valid which means that they present a real danger to consumers through false-positive and false-negative diagnoses. In particular the latter scenario can cost lives.

All in all, I did enjoy yesterday’s press briefing very much. I am aware of the fact that, in the realm of SCAM, the press have a most important role to play. Consumers rarely consult their doctor when deciding to use SCAM; frequently they go by what they read in the papers.

In this context, I find it noteworthy that, during the last years, the UK press have become considerably more sceptical. Not so long ago, most UK journalists used to praise SCAM like the best thing since sliced bread; today this attitude has laudably shifted towards a more rational stance. I am sure that the excellent work of the SCIENCE MEDIA CENTRE has played a crucial part in this positive development.

If you don’t want to get the flu…consult your chiropractor urgently!

We have heard often, here and elsewhere, that chiropractic is neither effective nor safe. But now I found that it is not useless after all!!! It is an effective preventative measure against infections like the common cold and the flu.

You find this hard to believe? But it must be true!

It is the message given to chiropractors on this website:

Chiropractic care raises your body’s natural resistance to disease by removing serious interference to its proper function, vertebral subluxations. For that reason, it’s important to explain to clients that their lymphatic system is basically their body’s drainage system. Lymph is a clear fluid composed of immune cells and the greater lymphatic system is made up of a network of ducts and lymph nodes that help filter out viruses, bacteria, and other harmful elements. Remind your patients that when they go to a medical doctor and complain of a cold or the flu, the first thing he or she checks is their lymph glands, feeling for enlarged lymph nodes on the neck under the jaw. Enlarged nodes, or swollen glands as we often call them, are a sign that the lymphatic system is actively fighting an infection or imbalance.

Here’s where chiropractic care comes in: when the body is healthy and working correctly, the bad things your lymph nodes collects drains out through the lymph ducts, some of which are located along the spine and in the neck. But when the neck and spine are out of alignment from muscle tension, a musculoskeletal condition or other injury, those lymph ducts can become blocked and congested. Fortunately, chiropractic adjustments restore the neck and spine to proper alignment, taking pressure off of the congested lymph ducts. That allows the lymphatic system to start flowing and working correctly again, naturally decongesting and helping your body’s immune system to work properly in the fight against colds, flu, and illness.

It’s hard to quantify the health benefits of a strong immune system, but one recent study found that patients who had chiropractic adjustments had a 200-400% stronger immune system than those who weren’t adjusted. Another study published in the Journal of Vertebral Subluxation Research showed that regular chiropractic care resulted in a 15% average decrease in the incidence of colds and the flu. For that reason, regular chiropractic adjustment and lymphatic massage will help keep a patient’s immune system strong and functioning optimally, and even will help minimize the symptoms and speed recovery once a patient already comes down with the flu.

And you thought that chiropractors had all but given up the notion of ‘subluxation’? No, they haven’t!

Subluxations are real, alive and kicking!

The germ theory of disease is false!

Chiropractic adjustments are the only cure and prevention!

Immunisations are just poison in your body!

What, I have not convinced you? Then you are not a chiropractor, perhaps?

You say they make numerous such claims because it keeps them in clover? Oh, you are cynical – shame on you!

Lymph-drainage, a hope for cancer patients?

Lymph oedema in the arms or legs is a frequent complication after lymph-node dissections for cancer. Treatment or prevention can be difficult, and the results  are often unsatisfactory. Consequently, the burden of suffering of cancer patients affected by this problem is immense.

Amongst several options, a little-known massage technique, called lymph-drainage (or lymphatic drainage, LD), is sometimes recommended. It consists of gentle manual movements which lightly push the lymph fluid through the lymphatic vessels that eventually enter into the blood circulation. During a session of lymph-drainage, a specially trained massage therapist lightly moves his or her hands along the lymph vessels to facilitate the lymph flow. The treatment is agreeable and relaxing, but does it really reduce the oedema?

In total, 10 RCTs with altogether 566 patients were identified. Two studies evaluating the preventive outcome of LD found no significant difference in the incidence of lymph-oedema between the LD and standard treatments. Seven studies assessed the reduction in arm volume, and found no significant difference between the LD and standard treatments.

The authors conclusion was negative about the value of LD: The current evidence from RCTs does not support the use of LD in preventing or treating lymph-oedema. However, clinical and statistical inconsistencies between the various studies confounded our evaluation of the effect of LD on breast-cancer-related lymph-oedema.

Perhaps a brand-new clinical trial which had not been included in the above assessment would have persuaded the authors to be a little more optimistic. This study evaluated the effectiveness of LD in the prevention of lymph-oedema after treatment of breast cancer. The study-population consisted of 67 women, who had undergone surgery for breast cancer. From the second day of surgery, 33 randomly chosen women were given LD. The control group consisted of 34 women who did not receive LD. Measurements of the volumes of both arms were taken before surgery and on days 2, 7, 14, and at 3 and 6 months after surgery.

The authors conclude that regardless of the surgery type and the number of the lymph nodes removed, LD effectively prevented lymph-oedema of the arm on the operated side. Even in high risk breast cancer treatments (operation plus irradiation), LD was demonstrated to be effective against arm volume increase. Even though confirmatory studies are needed, this study demonstrates that LD administered early after operation for breast cancer should be considered for the prevention of lymph-oedema.

So, does LD reduce oedema or not? This does not seem to be such a difficult question that it should take decades to resolve! And who would doubt that it is an important one? Lymph-oedema has the potential to seriously impede the quality of life of many patients, and it can even contribute to unnecessary mortality. The fact that the few available studies are too small and too weak to generate reliable results is disappointing and shines a dim light on the supposedly patient-centred research in oncology, in my view.

The concept of LD is plausible, at least some of the findings from clinical trials are encouraging, and the problem of lymph-oedema is both prevalent and relevant. So what is stopping us from funding a large, well-designed and definitive study?