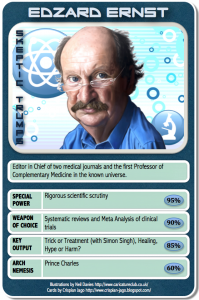 Edzard Ernst was born on 30 January 1948. He went to school in Germany and the US and studied psychology and medicine at the LM University in Munich. In 1977, he qualified as a physician in Germany where he also completed his MD and PhD theses.

Professor Ernst is/was founder/Editor-in-Chief of three medical journals (‘Focus on Alternative and Complementary Therapies’, ‘European Journal of Physical medicine and Rehabilitation’ and ‘Perfusion’). He has been a columnist for many publications (BMJ, GP, PJ, The Guardian, The Independent, The Spectator, etc.). His work has been awarded with 17 scientific awards (most recent: John Maddox Prize 2015 and Ockham Award 2017) and two Visiting Professorships (Canada and USA). He served on the ‘Medicines Commission’ of the British ‘Medicines and Healthcare Products Regulatory Agency’ (1994 – 2005).

According to Ioannidis et al (2019 PLOS Biology) standardized citation metrics, he is currently ranked No 104 amongst 100 000 scientists of all disciplines and No 1 amongst all researchers in the category of ‘Complementary & Alternative Medicine’. He as published >1000 papers in the peer-reviewed medical literature (H-Index=97 [2017]), 53 books, translated into over a dozen languages, >100 book-chapters. He has given > 700 invited lectures worldwide and supervised >50 MD and PhD theses.

During the last 25 years, Prof Ernst’s research focussed on the critical evaluation of (almost) all aspects of so-called alternative medicine (SCAM). He does not aim to promote this or that therapy; his goal is to provide objective evidence, reliable information and critical assessments. This ambition does not endear him to many believers in SCAM, including Prince Charles.

Prof Ernst is not paid by anyone for his work on this blog, and is not aware of having any conflicts of interest.

His most recent books are all written primarily for the lay readership:

(*also available in other languages)

Currently he is working on yet another book, preparing and giving lectures (see ‘Lectures and Talks’ section on this blog), as well as writing a regular column for the ‘Spectator’.