The HRI is an innovative international charity created to address the need for high quality scientific research in homeopathy… HRI is dedicated to promoting cutting research in homeopathy, using the most rigorous methods available, and communicating the results of such work beyond the usual academic circles… HRI aims to bring academically reliable information to a wide international audience, in an easy to understand form. This audience includes the general public, scientists, healthcare providers, healthcare policy makers, government and the media.

I should be a member of the HRI!

For years, I have pursued similar aims!

Hold on, perhaps not?

This article makes me wonder: 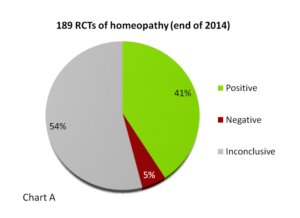 How does this compare with evidence for conventional medicine? 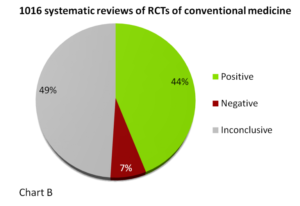 The implication here is that the evidence base for homeopathy is strikingly similar to that of real medicine.

Nice try! But sadly it has nothing to do with ‘reliable information’!!!

In fact, it is grossly (and I suspect deliberately) misleading.

Regular readers of this blog will have spotted the reason, because we discussed (part of) it before. Let me remind you:

For enthusiasts of alternative medicine, this can create a dilemma, particularly if there are lots of published studies with negative results. In this case, the totality of the available trial evidence is negative which means the treatment in question cannot be characterised as effective. It goes without saying that such an overall conclusion rubs the proponents of that therapy the wrong way. Consequently, they might look for ways to avoid this scenario.

One fairly obvious way of achieving this aim is to simply re-categorise the results. What, if we invented a new category? What, if we called some of the negative studies by a different name? What about INCONCLUSIVE?

That would be brilliant, wouldn’t it. We might end up with a simple statistic where the majority of the evidence is, after all, positive. And this, of course, would give the impression that the ineffective treatment in question is effective!

In the realm of alternative medicine, this ‘non-conclusive result’ method has recently become incredibly popular . Take homeopathy, for instance. The Faculty of Homeopathy proudly claim the following about clinical trials of homeopathy: Up to the end of 2011, there have been 164 peer-reviewed papers reporting randomised controlled trials (RCTs) in homeopathy. This represents research in 89 different medical conditions. Of those 164 RCT papers, 71 (43%) were positive, 9 (6%) negative and 80 (49%) non-conclusive.

This misleading nonsense was, of course, warmly received by homeopaths. The British Homeopathic Association, like many other organisations and individuals with an axe to grind lapped up the message and promptly repeated it: The body of evidence that exists shows that much more investigation is required – 43% of all the randomised controlled trials carried out have been positive, 6% negative and 49% inconclusive.

Let’s be clear what has happened here: the true percentage figures seem to show that 43% of studies (mostly of poor quality) suggest a positive result for homeopathy, while 57% of them (on average the ones of better quality) were negative. In other words, the majority of this evidence is negative. If we conducted a proper systematic review of this body of evidence, we would, of course, have to account for the quality of each study, and in this case we would have to conclude that homeopathy is not supported by sound evidence of effectiveness.

The little trick of applying the ‘INCONCLUSIVE’ method has thus turned this overall result upside down: black has become white! No wonder that it is so popular with proponents of all sorts of bogus treatments.

But one trick is not enough for the HRI! For thoroughly misinforming the public they have a second one up their sleeve.

And that is ‘comparing apples with pears’  – RCTs with systematic reviews, in their case.

In contrast to RCTs, systematic reviews can be (and often are) INCONCLUSIVE. As they evaluate the totality of all RCTs on a given subject, it is possible that some RCTs are positive, while others are negative. When, for example, the number of high-quality, positive studies included in a systematic review is similar to the number of high-quality, negative trials, the overall result of that review would be INCONCLUSIVE. And this is one of the reasons why the findings of systematic reviews cannot be compared in this way to those of RCTs.

I suspect that the people at the HRI know all this. They are not daft! In fact, they are quite clever. But unfortunately, they seem to employ their cleverness not for informing but for misleading their ‘wide international audience’.