This story made the social media recently: 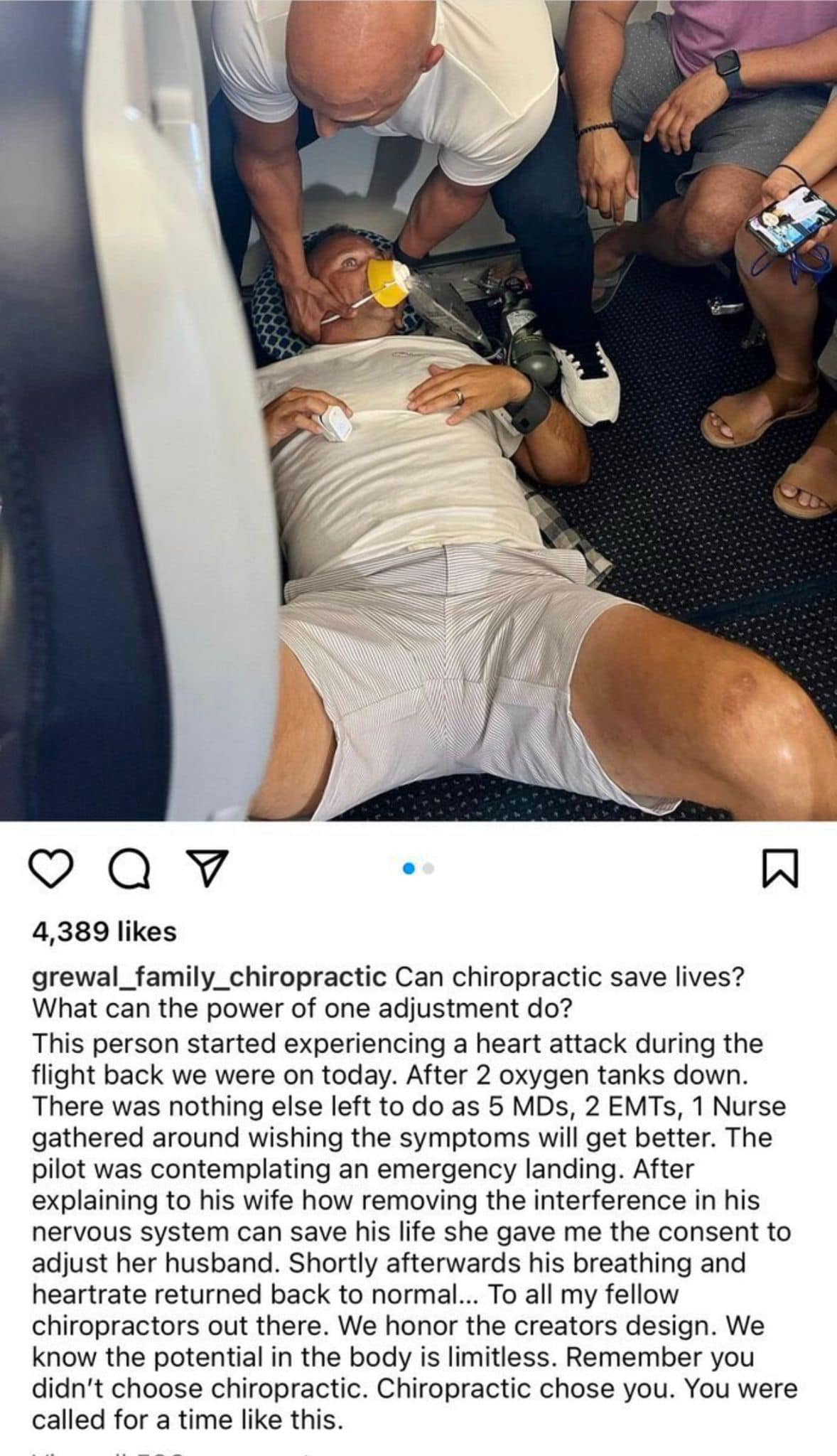 Yes, I can well believe that many chiros are daft enough to interpret the incident in this way. Yet I think it’s a lovely story, not least because it reminds me of one of my own experiences:

I was on a plane to Toronto and had fallen asleep after a good meal and a few glasses of wine when a stewardess woke me saying: “We think you are a doctor!?”

“That’s right, I am a professor of alternative medicine”, I said trying to wake up.

“We have someone on board who seems to be dying. Would you come and have a look? We moved him into 1st class.”

Arrived in 1st class, she showed me the patient and a stethoscope. The patient was unconscious and slightly blue in the face. I opened his shirt and used the stethoscope only to find that this device is utterly useless on a plane; the sound of the engine by far overwhelms anything else. With my free hand, I tried to find a pulse – without success! Meanwhile, I had seen a fresh scar on the patient’s chest with something round implanted underneath. I concluded that the patient had recently had a pacemaker implant. Evidently, the electronic device had malfunctioned.

At this stage, two stewardesses were pressing me: “The captain needs to know now whether to prepare for an emergency stop in Newfoundland or to fly on. It is your decision.”

I had problems thinking clearly. What was best? The patient was clearly dying and there was nothing I could do about it. I replied by asking them to give me 5 minutes while I tried my best. But what could I do? I decided that I could do nothing but hold the patient’s hand and let him die in peace.

The Stewardesses watched me doing this and must have thought that I was trying some sort of energy healing, perhaps Reiki. This awkward situation continued for several minutes until – out of the blue – I felt a regular, strong pulse. Evidently, the pacemaker had started functioning again. It did not last long until the patient’s color turned pink and he began to talk. I instructed the pilot to continue our path to Toronto.

After I had remained with the patient for another 10 minutes or so, the Stewardesses came and announced: “We have moved your things into 1st class; like this, you can keep an eye on him.” The rest of the journey was uneventful – except the Stewardesses came repeatedly giving me bottles of champagne and fine wine to take with me into Toronto. And each time they politely asked whether my healing method would not also work for the various ailments they happened to suffer from – varicose veins, headache, PMS, fatigue …

So, here is my message to all the fellow energy healers out there:

We honor the creator’s design.

We know of the potential of the body is limitless.

Remember, you did not choose energy healing.

In case you are beginning to wonder whether I have gone round the bend, the answer is NO! I am not an energy healer. In fact, I am as much NOT an energy healer, as the chiropractor in the above story has NOT saved the life of his patient. Chiropractors and stewardesses, it seems to me, have one thing in common: they do not understand much about medicine.

On arrival in Toronto, the patient was met by a team of fully equipped medics. I explained what had happened and they took him off to the hospital. As far as I know, he made a full recovery after the faulty pacemaker had been replaced. After my return to the UK, British Airways sent me a huge hamper to thank me.