Veterinary acupuncture is not evidence-based

Acupuncture for animals has a long history in China. In the West, it was introduced in the 1970s when acupuncture became popular for humans. A recent article sums up our current knowledge on the subject. Here is an excerpt:

Acupuncture is used mainly for functional problems such as those involving noninfectious inflammation, paralysis, or pain. For small animals, acupuncture has been used for treating arthritis, hip dysplasia, lick granuloma, feline asthma, diarrhea, and certain reproductive problems. For larger animals, acupuncture has been used for treating downer cow syndrome, facial nerve paralysis, allergic dermatitis, respiratory problems, nonsurgical colic, and certain reproductive disorders.Acupuncture has also been used on competitive animals. There are veterinarians who use acupuncture along with herbs to treat muscle injuries in dogs and cats. Veterinarians charge around $85 for each acupuncture session.[8]Veterinary acupuncture has also recently been used on more exotic animals, such as chimpanzees (Pan troglodytes)[9] and an alligator with scoliosis,[10] though this is still quite rare.

In 2001, a review found insufficient evidence to support equine acupuncture. The review found uniformly negative results in the highest quality studies.[11] In 2006, a systematic review of veterinary acupuncture found “no compelling evidence to recommend or reject acupuncture for any condition in domestic animals”, citing trials with, on average, low methodological quality or trials that are in need of independent replication.[1] In 2009, a review on canine arthritis found “weak or no evidence in support of” various treatments, including acupuncture.[12]

To put it in a nutshell: acupuncture for animals is not evidence-based. 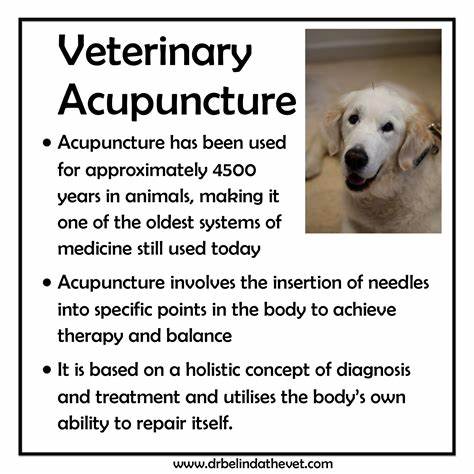 How can I be so sure?

Because ref 1 in the text above refers to our paper. Here is its abstract:

This evidence is in sharp contrast to the misinformation published by the ‘IVAS’ (International Veterinary Acupuncture Society). Under the heading “For Which Conditions is Acupuncture Indicated?“, they propagate the following myth:

Acupuncture is indicated for functional problems such as those that involve paralysis, noninfectious inflammation (such as allergies), and pain. For small animals, the following are some of the general conditions which may be treated with acupuncture:

For large animals, acupuncture is again commonly used for functional problems. Some of the general conditions where it might be applied are the following:

In addition, regular acupuncture treatment can treat minor sports injuries as they occur and help to keep muscles and tendons resistant to injury. World-class professional and amateur athletes often use acupuncture as a routine part of their training. If your animals are involved in any athletic endeavor, such as racing, jumping, or showing, acupuncture can help them keep in top physical condition.

And what is the conclusion?

6 Responses to Veterinary acupuncture is not evidence-based