Elderberry for influenza? How consumers are being misled by seemingly responsible sources

“Eating elderberries can help minimise influenza symptoms.” This statement comes from a press release by the University of Sydney. As it turned out, the announcement was not just erroneous but it also had concealed that the in-vitro study that formed the basis for the press-release was part-funded by the very company, Pharmacare, which sells elderberry-based flu remedies. 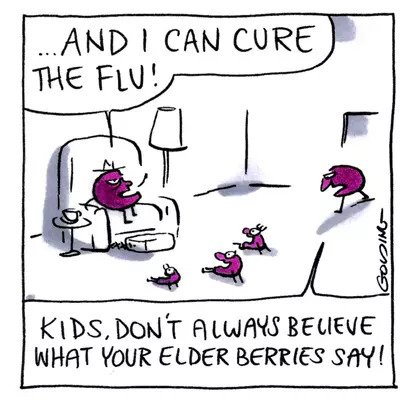 “This is an appalling misrepresentation of this Pharmacare-funded in-vitro study,” said associate professor Ken Harvey, president of Friends of Science in Medicine. “It was inappropriate and misleading to imply from this study that an extract was ‘proven to fight flu’.” A University of Sydney spokeswoman confirmed Pharmacare was shown a copy of the press release before it was published.

This is an embarrassing turn of events, no doubt. But what about elderberry (Sambucus nigra) and the flu? Is there any evidence?

A systematic review quantified the effects of elderberry supplementation. Supplementation with elderberry was found to substantially reduce upper respiratory symptoms. The quantitative synthesis of the effects yielded a large mean effect size. The authors concluded that these findings present an alternative to antibiotic misuse for upper respiratory symptoms due to viral infections, and a potentially safer alternative to prescription drugs for routine cases of the common cold and influenza.

No large randomized, controlled trials evaluating the effectiveness of elderberry for prevention or treatment of influenza have been conducted to date. Elderberry appears to have some activity against influenza virus strains in vitro. In two small studies (conducted outside the US), adults with influenza A or B virus infection taking elderberry extract reported a shorter duration of symptoms compared to those taking placebo. Consuming uncooked blue or black elderberries can cause nausea and vomiting. The rest of the plant (bark, stems, leaves, and root) contains sambunigrin, which can release cyanide. No data are available on the safety of elderberry use during pregnancy or while breastfeeding. CONCLUSION — Prompt treatment with an antiviral drug such as oseltamivir (Tamiflu, and generics) has been shown to be effective in large randomized, controlled trials in reducing the duration of influenza symptoms, and it may reduce the risk of influenza-related complications. There is no acceptable evidence to date that elderberry is effective for prevention or treatment of influenza and its safety is unclear.

2 Responses to Elderberry for influenza? How consumers are being misled by seemingly responsible sources