As we have discussed ad nauseam on this blog, spinal manipulation therapy (SMT) can cause serious adverse events, including spinal epidural hematoma (SEH), an emergency that can cause severe neurological dysfunction. Chinese surgeons have reported three cases of SEH after SMT.

All three patients underwent surgery after failed conservative treatment. Blood clots were found during the operation in case 1 and case 2, and the postoperative pathology confirmed a hematoma. In case three, a vein ruptured during the operation, causing massive bleeding. The three patients recovered to ASIA grade E on day 5, 1 wk, and day 10 after surgery, respectively. All patients returned to normal after 3 mo of follow-up. 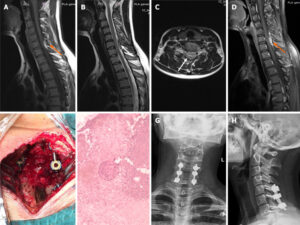 The authors concluded that before proceeding with SMT, each patient should be evaluated in detail and checked for risk factors. In cases where the physical condition changes rapidly, physicians should be alert to the danger and send the patient to the emergency department for a complete MRI examination. We recommend surgery if neurological symptoms appear.

In their paper, the authors also review 15 further cases of SEH that have been previously published. They stress several times in their article that this complication is rare. In my view, this begs the question: how do they know? As there is no post-marketing surveillance of chiropractors or other clinicians doing SMT, I would insist that nobody can be sure about the true incidence of SEH or any other complication after SMT.