Once upon a time, arsenic has been used widely for medicinal and other purposes. Now that we know how toxic it is, few people would voluntarily take it – except of course fans of homeopathy. In homeopathy, arsenic is an important and popular remedy. 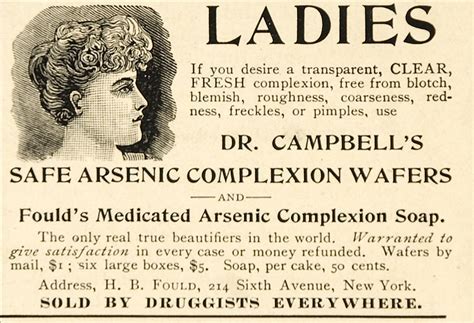 Here is what HOMEOPATHY PLUS tell us about its therapeutic potential:

Arsenic is a toxic chemical element, historically used as a poison. It is safe to use with infants through to the elderly when prepared in homeopathic potencies. Those who need Arsenicum are prone to hypochondriasis and are intolerant of untidiness and disorder. They are anxious, critical, and restless, and dislike being alone but may be irritable with company. Restlessness may be followed by exhaustion which is out of proportion to their illness. They fear illness and disease, death, and being alone. Discharges tend to be acrid and burning. Burning pains paradoxically feel better for heat (except the headache which is better for cold applications). Thirst is for sips of warm drinks but cold drinks worsen. Symptoms worsen between midnight and 2 AM.

Where do I find it?

While above self-limiting or acute complaints are suitable for home treatment, see your healthcare provider if symptoms worsen or fail to improve. Chronic or persistent complaints, which may or may not be mentioned above, require a different treatment and dosage protocol so are best managed by a qualified homeopath for good results.

For acute and self-limiting complaints, take one pill or five drops of the remedy every 30 minutes to 4 hours (30 minutes for intense symptoms, 4 hours for milder ones). Once an improvement is noticed, stop dosing and repeat the remedy only if symptoms return. If there is no improvement at all by three doses, choose a different remedy or seek professional guidance. Chronic symptoms or complaints require a course of professional treatment to manage the changes in potencies and remedies that will be required.

So, arsenic is safe to use with infants through to the elderly when prepared in homeopathic potencies!

For about 4 years the patient had taken globules of a freely purchasable homeopathic remedy containing inorganic arsenic (iAs) diluted to D6 (average arsenic content per single globule: 0.85 ± 0.08 ng). She took the remedy because it was advertised for gastrointestinal confort. In the previous 7 months, she had taken 20 to 50 globules daily (average 30 ng arsenic daily).

She complained of nausea, stomach and abdominal cramps, diarrhoea and flatulence, headache, dizziness, anxiety, difficulty concentrating, insomnia, snoring, leg cramps and fatigue, loss of appetite, increased thirst and sweating, reduced diuresis, weight gain, paleness and coolness of both hands with a furry feeling of the hands, eczema of the hands, arms and legs, conjunctivitis and irregular menstruation.

The physical and laboratory examinations showed a body mass index of 30 kg/m2, acne vulgaris, bilateral spotted leukonychia, eczema of hands, arms and legs, non-pitting oedema of the legs, elevated plasma alkaline phosphatase activity, folate deficiency and severe vitamin D3 insufficiency. The arsenic concentration in her blood was <0.013 µmol/l, and arsenic was undetectable in her scalp hair. The total iAs concentration was 116 nmol/l in the morning urine and 47 nmol/l in the afternoon urine.

The urinary arsenic concentration decreased and the patient’s complaints improved upon interruption of the arsenic globules, vitamin D3, thiamine and folic acid supplementation, and symptomatic therapy.

The author concluded that an avoidable toxicant such as inorganic arsenic, for which no scientific safe dose threshold exists, should be avoided and not be found in over-the-counter medications.

The author rightly states that causality of this association cannot be proven. However, he also stresses that a causal link between chronic iAs exposure and the patient’s nonspecific systemic symptoms is nevertheless suggested by circumstantial evidence pointing to the disappearance of CAsI signs and symptoms after therapy including interruption of the exposure. In his (and my) view, this renders causality most likely.