Chronic arsenicosis due to homeopathy

This article reported the case of a woman from West Bengal who presented with generalised weakness, weight loss, intermittent diffuse pain abdomen, anorexia, nausea, off and on diarrhoea for eight months. She also noticed darkening of her complexion for six months. Since last 4 months, she had intermittent headache of varying duration, frequency and intensity with tingling and numbness of all four limbs. 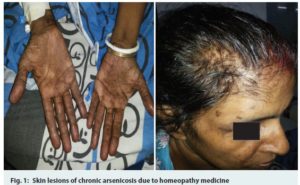 Further questioning revealed that the patient was taking arsenicum album for her anxiety depressive disorder for last one year. The drug was discontinued. Six months later the patient had fully recovered. The authors concluded that an apparently harmless homeopathy medicine may cause multisystem involvement.

The only other case reports of homeopathic arsenic poisoning is this paper:

Case 1 presented with melanosis and keratosis following short-term use of Arsenic Bromide 1-X followed by long-term use of other arsenic-containing homeopathic preparations. Case 2 developed melanotic arsenical skin lesions after taking Arsenicum Sulfuratum Flavum-1-X (Arsenic S.F. 1-X) in an effort to treat his white skin patches. Case 3 consumed Arsenic Bromide 1-X for 6 days in an effort to treat his diabetes and developed an acute gastrointestinal illness followed by leukopenia, thrombocytopenia, and diffuse dermal melanosis with patchy desquamation. Within approximately 2 weeks, he developed a toxic polyneuropathy resulting in quadriparesis. Arsenic concentrations in all three patients were significantly elevated in integument tissue samples. In all three cases, arsenic concentrations in drinking water were normal but arsenic concentrations in samples of the homeopathic medications were elevated. CONCLUSION: Arsenic used therapeutically in homeopathic medicines can cause clinical toxicity if the medications are improperly used.

The authors of the new paper fail to mention the potency of the homeopathic arsenic preparation taken by the patient. As far as I know, in Europe, only high potencies of arsenic are prescribed and dispensed; these remedies contain no or very little arsenic and can thus be considered harmless. In India, however, the 1-X potency seems to be popular, according to the second paper cited above. It describes a dilution of 1: 10 only. It is clear that taking such a remedy would quickly lead to severe toxicity.

This begs the questions: Is it legal to prescribe and dispense such remedies in India or anywhere else? And, in case it is legal, why?

10 Responses to Chronic arsenicosis due to homeopathy