A new acupuncture trial with a positive result – alas, it seems too good to be true

Electroacupuncture (EA) is often advocated for depression and sleep disorders but its efficacy remains uncertain. The aim of this study was, therefore, to “assess the efficacy and safety of EA as an alternative therapy in improving sleep quality and mental state for patients with insomnia and depression.”

A 32-week patient- and assessor-blinded, randomized, sham-controlled clinical trial (8-week intervention plus 24-week follow-up) was conducted from September 1, 2016, to July 30, 2019, at 3 tertiary hospitals in Shanghai, China. Patients were randomized to receive

Patients in the EA or SA groups received a 30-minute treatment 3 times per week (usually every other day except Sunday) for 8 consecutive weeks. All treatments were performed by licensed acupuncturists with at least 5 years of clinical experience. A total of 6 acupuncturists (2 at each center; including X.Y. and S.Z.) performed EA and SA, and they received standardized training on the intervention method before the trial. The regular acupuncture method was applied at the Baihui (GV20), Shenting (GV24), Yintang (GV29), Anmian (EX-HN22), Shenmen (HT7), Neiguan (PC6), and SanYinjiao (SP6) acupuncture points, with 0.25 × 25-mm and 0.30 × 40-mm real needles (Wuxi Jiajian Medical Device Co, Ltd), or 0.30 × 30-mm sham needles (Streitberger sham device [Asia-med GmbH]).

For patients in the EA group, rotating or lifting-thrusting manipulation was applied for deqi sensation after needle insertion. The 2 electrodes of the electrostimulator (CMNS6-1 [Wuxi Jiajian Medical Device Co, Ltd]) were connected to the needles at GV20 and GV29, delivering a continuous wave based on the patient’s tolerance. Patients in the SA group felt a pricking sensation when the blunt needle tip touched the skin, but without needle insertion. All indicators of the nearby electrostimulator were set to 0, with the light switched on. Standard care (also known as treatment as usual or routine care) was used in the control group. Patients receiving standard care were recommended by the researchers to get regular exercise, eat a healthy diet, and manage their stress level during the trial. They were asked to keep the regular administration of antidepressants, sedatives, or hypnotics as well. Psychiatrists in the Shanghai Mental Health Center (including X.L.) guided all patients’ standard care treatment and provided professional advice when a patient’s condition changed. 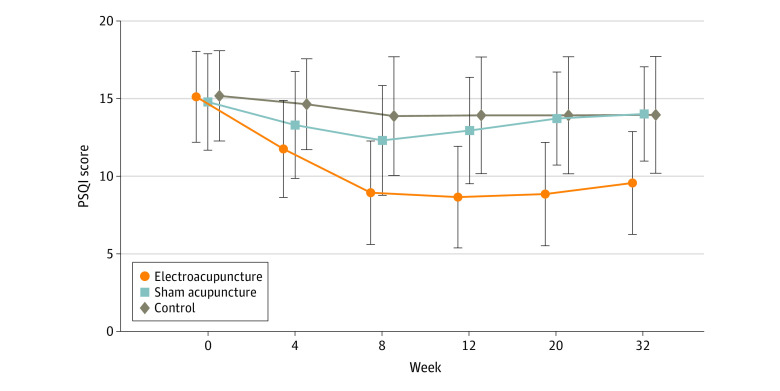 The authors concluded that, in this randomized clinical trial of EA treatment for insomnia in patients with depression, quality of sleep improved significantly in the EA group compared with the SA or control group at week 8 and was sustained at week 32.

This trial seems rigorous, it has a sizable sample size, uses a credible placebo procedure, and is reported in sufficient detail. Why then am I skeptical?

If you have other and better reasons, I’d be most interested to hear them.

One Response to A new acupuncture trial with a positive result – alas, it seems too good to be true