The prevalence of SCAM use in general populations: No, it’s NOT increasing

Traditional, complementary, and alternative medicine (TCAM) – as most of my readers know, I prefer the abbreviation SCAM for so-called alternative medicine – refers to a broad range of health practices and products typically not part of the ‘conventional medicine’ system. Its use is substantial among the general population. TCAM products and therapies may be used in addition to, or instead of, conventional medicine approaches, and some have been associated with adverse reactions or other harms.

The aims of this systematic review were to identify and examine recently published national studies globally on the prevalence of TCAM use in the general population, to review the research methods used in these studies, and to propose best practices for future studies exploring the prevalence of use of TCAM.

MEDLINE, Embase, CINAHL, PsycINFO, and AMED were searched to identify relevant studies published since 2010. Reports describing the prevalence of TCAM use in a national study among the general population were included. The quality of included studies was assessed using a risk of bias tool developed by Hoy et al. Relevant data were extracted and summarised.

Forty studies from 14 countries, comprising 21 national surveys and one cross-national survey, were included. Studies explored the use of TCAM products (e.g. herbal medicines), TCAM practitioners/therapies, or both. Included studies used different TCAM definitions, prevalence time frames and data collection tools, methods and analyses, thereby limiting comparability across studies. The reported prevalence of use of TCAM (products and/or practitioners/therapies) over the previous 12 months was 24–71.3%.

The authors concluded that the reported prevalence of use of TCAM (products and/or practitioners/therapies) is high, but may underestimate use. Published prevalence data varied considerably, at least in part because studies utilise different data collection tools, methods and operational definitions, limiting cross-study comparisons and study reproducibility. For best practice, comprehensive, detailed data on TCAM exposures are needed, and studies should report an operational definition (including the context of TCAM use, products/practices/therapies included and excluded), publish survey questions and describe the data-coding criteria and analysis approach used. 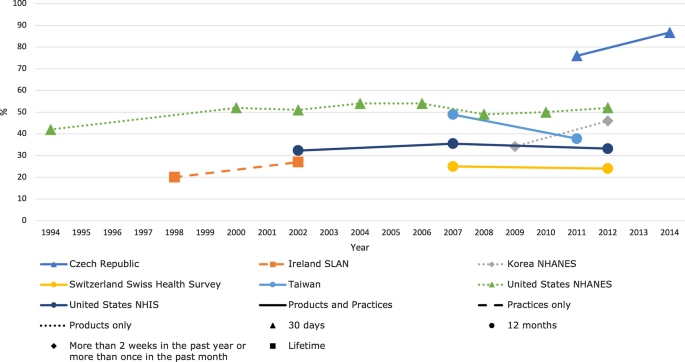 [Trends in prevalence of TCAM use by country for countries with at least two data collection waves from a nationally representative study. For data collected over several years (e.g. 2007–2009), the prevalence data are plotted at the end of the data collection period (e.g. 2009). Solid and perforated lines between consecutive points are for illustrative purposes only and are not intended to represent linearity. NHANES National Health and Nutrition Examination Survey, NHIS National Health and Interview Survey, SLAN Survey of Lifestyle, Attitudes and Nutrition.]

The review discloses that the prevalence reported across countries ranges from 24 to 71%. This huge variability is not very surprising; some of the many reasons for this phenomenon include:

Despite these problems, the information summarized in the review is fascinating in several respects. For me, the most interesting message here is this: the plethora of claims that SCAM use is increasing are not supported by sound evidence.

2 Responses to The prevalence of SCAM use in general populations: No, it’s NOT increasing