One hundred and fifty patients from the baseline study, who initially met the LDH diagnostic criteria with a chief complaint of radiating pain and received integrated treatment, were recruited for this follow-up study. The 10-year follow-up was conducted from February 2018 to March 2018 on pain, disability, satisfaction, quality of life, and changes in a herniated disc, muscles, and fat through magnetic resonance imaging.

Sixty-five patients were included in this follow-up study. Visual analogue scale score for lower back pain and radiating leg pain were maintained at a significantly lower level than the baseline level. Significant improvements in Oswestry disability index and quality of life were consistently present. MRI confirmed that disc herniation size was reduced over the 10-year follow-up. In total, 95.38% of the patients were either “satisfied” or “extremely satisfied” with the treatment outcomes and 89.23% of the patients claimed their condition “improved” or “highly improved” at the 10-year follow-up.

This study and its conclusion beg several questions:

WHAT DID THE SCAM CONSIST OF?

The answer is not  provided in the paper; instead, the authors refer to 3 previous articles where they claim to have published the treatment schedule:

The traditional Korean spinal manipulations used (‘Chuna therapy’ – the references provided for it do NOT refer to this specific way of manipulation) seemed interesting, I thought. Here is an explanation from an unrelated paper: 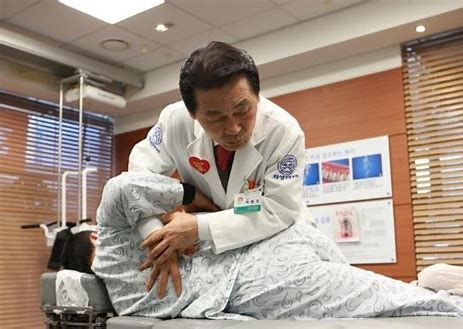 Chuna, which is a traditional manual therapy practiced by Korean medicine doctors, has been applied to various diseases in Korea. Chuna manual therapy (CMT) is a technique that uses the hand, other parts of the doctor’s body or other supplementary devices such as a table to restore the normal function and structure of pathological somatic tissues by mobilization and manipulation. CMT includes various techniques such as thrust, mobilization, distraction of the spine and joints, and soft tissue release. These techniques were developed by combining aspects of Chinese Tuina, chiropratic, and osteopathic medicine.[13] It has been actively growing in Korea, academically and clinically, since the establishment of the Chuna Society (the Korean Society of Chuna Manual Medicine for Spine and Nerves, KSCMM) in 1991.[14] Recently, Chuna has had its effects nationally recognized and was included in the Korean national health insurance in March 2019.[15]

This almost answers the other questions I had. Almost, but not quite. Here are two more:

If I am correct, this would then be the 4th article reporting the findings of a SCAM intervention that aggravated lumbar disc herniation.

I know that this is a mere hypothesis but it is at least as plausible as the conclusion drawn by the authors.