What a surprise! A fatally flawed, Boiron-sponsored study of HOMEOPATHY yields a positive result

This study assessed the effectiveness of Oscillococcinum in the protection from upper respiratory tract infections (URTIs) in patients with COPD who had been vaccinated against influenza infection over the 2018-2019 winter season.

A total of 106 patients were randomized into two groups:

The primary endpoint was the incidence rate of URTIs (number of URTIs/1000 patient-treatment exposure days) during follow-up compared between the two groups.

There was no significant difference in any of the demographic characteristics, baseline COPD, or clinical data between the two treatment groups (OV and V). The URTI incidence rate was significantly higher in group V than in group OV (2.9 versus 1.2 episodes/1000 treatment days, difference OV-V = -1.7; p=0.0312). There was a significant delay in occurrence of an URTI episode in the OV group versus the V group (mean ± standard error: 48.7 ± 3.0 versus 67.0 ± 2.8 days, respectively; p=0.0158). Limitations to this study include its small population size and the self-recording by patients of the number and duration of URTIs and exacerbations.

The authors concluded that the use of Oscillococcinum in patients with COPD led to a significant decrease in incidence and a delay in the appearance of URTI symptoms during the influenza-exposure period. The results of this study confirm the impact of this homeopathic medication on URTIs in patients with COPD. 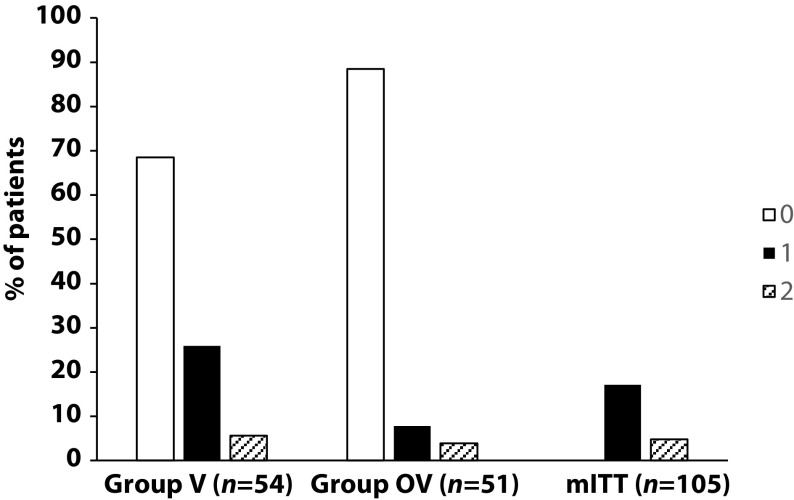 Primary endpoint, comparison of the number of upper respiratory tract infections in the two treatment groups during follow-up

This prospective, randomized, single-center study was funded by Laboratoires Boiron, was conducted in the Pneumology Department of Charles Nicolle Hospital, Tunis, and was written up by a commercial firm specializing in writing for the pharmaceutical industry. The latter point may explain why it reads well and elegantly glosses over the many flaws of the trial.

If I did not know better, I might suspect that the study was designed to deceive us (Boiron would, of course, never do this!): The primary endpoint was the incidence rate of URTIs (number of URTIs/1000 patient-treatment exposure days) in the two groups during the follow-up period. This rate is calculated as the number of episodes of URTIs per 1000 days of follow-up/treatment exposure. The rates were then compared between the OV and V groups. The following symptoms were considered indicative of an URTI: fever, shivering, runny or blocked nose, sneezing, muscular aches/pain, sore throat, watery eyes, headaches, nausea/vomiting, diarrhoea, fatigue and loss of appetite.

This means that there was no verification whatsoever of the primary endpoint. In itself, this flaw would perhaps not be so bad. But put it together with the fact that patients were not blinded (there were no placebos!), it certainly is fatal.

In essence, the study shows that patients who perceive to receive treatment will also perceive to have fewer URTIs.

8 Responses to What a surprise! A fatally flawed, Boiron-sponsored study of HOMEOPATHY yields a positive result