Yet more evidence to suggest that acupuncture is a placebo therapy

Purposive sampling was used to capture the experience of responders (n=15) and non-responders (n=15) to acupuncture via individual in-depth interviews. Design and analysis followed a framework analysis approach, with reference to an existing model on acupuncture non-specific effects. Themes emerging outside of this model were purposefully explored. 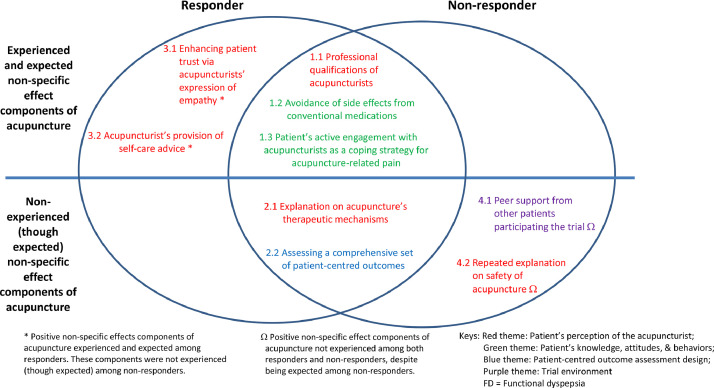 The findings suggest that responders had a more trusting relationship with the acupuncturist in response to their expression of empathy. In turn, they were more actively engaged in lifestyle modifications and dietary advice offered by acupuncturists. Non-responders were not satisfied with the level of reassurance regarding acupuncture safety. They were also expecting more peer support from fellow participants, regarded that as an empowerment process for initiating and sustaining lifestyle changes.

The authors concluded that our results highlighted key differences in acupuncture non-specific effect components experienced by responders and non-responders. Positive non-specific effects contributing to overall benefits could be enhanced by emphasizing on empathy expression from acupuncturists, trust-building, offering appropriate explanations on safety, and organizing patient support groups. Further research on the relative importance of each component is warranted.

I doubt that this tiny study lends itself to drawing any firm conclusions. However, what they seem to imply and what the authors (proponents of acupuncture) ignore totally is the following: acupuncture responders are those people who respond to the context of the treatment situation. Thus their positive result is not due to the specific effects of acupuncture itself but to non-specific effects. In other words, acupuncture operates predominantly or entirely via non-specific effects. Or, to put it bluntly: this analysis confirms what we have discussed many times before (see for instance here, here, and here), namely that

acupuncture is a placebo therapy.