Pelargonium sidoides, a traditional medicinal plant native to South Africa, is one of the ornamental geraniums that is thought to be effective in treating URTIs. The plant seems to contain a large variety of phytochemicals, including amino acids, phenolic acids, α-hydroxy-acids, vitamins, polyphenols, flavonoids, coumarins, coumarins glucosides, coumarin sulphates and nucleotides. It is mostly used to treat the symptoms of acute bronchitis, common cold and acute rhinosinusitis. 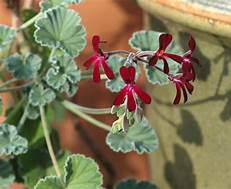 The present study aimed to assess the effectiveness of the liquid herbal drug preparation from the root extracts of Pelargonium sidoides in improving symptoms of uncomplicated upper respiratory tract infections (URTIs). One hundred sixty-four patients with URTI were randomized and given either verum containing the root extracts of Pelargonium sidoides (n = 82) or a matching placebo (n = 82) in a single-blind manner for 7 days. The median total scores of all symptoms (TSS) showed a significant decreasing trend in the group treated with the root extracts derived from Pelargonium sidoides compared to the placebo group from day 0 to day 7 (TSS significantly decreased by 0.85 points in the root extract group compared to a decrease of 0.62 points, p = 0.018). “Cough frequency” showed a significant improvement from day 0 to day 3 (p = 0.023). There was also detected a significant recovery in “sneezing” on day 3 via Brunner-Langer model, and it was detected that the extract administration given in the first 24 h onset of the symptoms had provided a significant improvement in day 0 to day 3 (difference of TSS 0.18 point, p = 0.011).

The authors concluded that Pelargonium sidoides extracts are effective in relieving the symptom burden in the duration of the disease. It may be regarded as an alternative option for the management of URTIs.

These findings are less surprising than they may seem. Already in 2008, we published the following systematic review:

Objective: To critically assess the efficacy of Pelargonium sidoides for treating acute bronchitis.

Results: Six RCTs met the inclusion criteria, of which 4 were suitable for statistical pooling. Methodological quality of most trials was good. One study compared an extract of P. sidoides, EPs 7630, against conventional non-antibiotic treatment (acetylcysteine); the other five studies tested EPs 7630 against placebo. All RCTs reported findings suggesting the effectiveness of P. sidoides in treating acute bronchitis. Meta-analysis of the four placebo-controlled RCTs suggested that EPs 7630 significantly reduced bronchitis symptom scores in patients with acute bronchitis by day 7. No serious adverse events were reported.

Conclusion: There is encouraging evidence from currently available data that P. sidoides is effective compared to placebo for patients with acute bronchitis.

Meanwhile, P.sidoides has been associated with liver damage, a fact that might dampen our enthusiasm for this remedy.  Nevertheless, it seems to me that this plant merits further study.