On Twitter, the hype had begun even before its text was available. Priti Gandhi, for instance, tweeted:

Yet another feather in India’s cap!! 1st evidence-based, CoPP-WHO GMP certified medicine for Covid-19 released today. Congratulations to @yogrishiramdev ji, @Ach_Balkrishna ji & the team of scientists at Patanjali Research Institute. Your efforts have been successful!! #Ayurveda

So, what is it all about? This study included 100 patients and was designed to evaluate the impact of traditional Indian Ayurvedic treatment on asymptomatic patients with COVID-19 infection. It is a placebo-controlled randomized double-blind pilot clinical trial that was conducted at the Department of Medicine in the National Institute of Medical Sciences and Research, Jaipur, India.

The verum treatment consisted of:

The treatment was given orally to the patients in the treatment group twice per day for 7 days. Medicines were given in the form of tablets and each tablet weighed 500 mg. While Swasari Ras was administered in powdered form, 30 min before breakfasts and dinners, rest were scheduled for 30 min post-meals. Patients in the treatment group also received 4 drops of Anu taila (traditional nasal drop) in each nostril every day 1 h before breakfast. Patients in the placebo group received identical-looking tablets and drops, post-randomization, and double-blinded assortments. 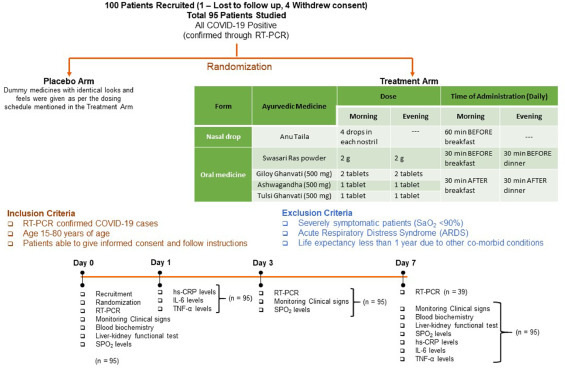 The RT-qPCR test was used for the detection of viral load in the nasopharyngeal and oropharyngeal swab samples of study participants during the study. Chemiluminescent immunometric assay was used to quantify serum levels of interleukin-6 (IL-6), tumor necrosis factor alpha (TNF-α), and high sensitivity C-reactive protein (hs-CRP) on day 1 and day 7 of the study. Patient testing negative for SARS-CoV-2 in the RT-PCR analysis was the primary outcome of this study.

The authors concluded that Ayurvedic treatment can expedite virological clearance, help in faster recovery and concomitantly reduce the risk of viral dissemination. Reduced inflammation markers suggested less severity of SARS-CoV-2 infection in the treatment group. Moreover, there was no adverse effect observed to be associated with this treatment.

I have the following concerns or questions about this trial:

An article in The Economic Times’ reported this:

Patanjali Ayurved released what it called the first “evidence-based” medicine for Covid-19 on Friday. It claimed it has been “recognised by the WHO (World Health Organization) as an ayurvedic medicine for corona”.

Patanjali promoter, yoga guru Baba Ramdev, released a scientific research paper in this regard at the launch, presided over by Union health minister Harsh Vardhan and transport minister Nitin Gadkari.

Under the CoPP, Coronil can be exported to 158 countries, the company said, adding that based on the presented data, the ministry has recognised Coronil as medicine for “supporting measure in Covid-19”.

Am I the only one who fears that something is not entirely kosher about the study? (This is an honest question, and I would be pleased to receive answers from my readers)