It has been reported that, in China, patients affected by the coronavirus are being treated with Traditional Chinese Medicine (TCM). Treatments in Wuhan hospitals combine TCM and western medicines, said Wang Hesheng, the new health commission head in Hubei, the province at the centre of the epidemy. He said TCM was applied on more than half of confirmed cases in Hubei. “Our efforts have shown some good result,” Wang said at a press conference on Saturday. Top TCM-experts have been sent to Hubei for “research and treatment,” he said. Some 2,200 TCM workers have been sent to Hubei, Wang said.

Another website confirmed that TCM has been applied to more than half of the confirmed patients of corona or COVID-19 infection in Hubei. It’s also used in the prevention and control of COVID-19 at the community level. “Since the beginning of the outbreak, the government has attached importance to both TCM and Western medicine by mobilizing the strongest scientific research and medical forces in both fields to treat the patients,” said Wang Hesheng. “By coordinating the resources of traditional Chinese and Western medicine, we strive to improve the cure rate and reduce fatalities by the greatest possible amount to effectively safeguard the safety and health of the people,” Wang noted. 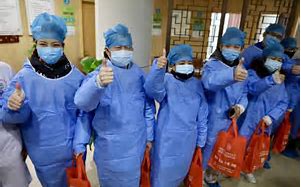 China Daily added that many of the medical workers also have participated in the fight against the SARS outbreak in 2003, said Huang Luqi, president of China Academy of Chinese Medical Sciences. Three national-level TCM teams, organized by the National Administration of Traditional Chinese Medicine, also have been dispatched to Hubei, said Huang, head of the TCM team at Wuhan Jinyintan Hospital.

The TCM workers have treated 248 confirmed and suspected novel coronavirus patients, and 159 of them have shown improvement and 51 have been discharged from the hospital, Huang said at a daily news conference in Wuhan. More than 75 percent of novel coronavirus patients in Hubei, and more than 90 percent of patients in other regions of the country, have received TCM treatment, he said. “We hope that Hubei province and Wuhan city can increase the use of TCM in treating confirmed and suspected novel coronavirus patients,” Huang said. TCM can shorten the course of disease for patients with severe symptoms, reduce the possibility of mild infections becoming severe, help with patient recovery and disease prevention and offer psychological support to patients, he noted.

No information is available on the nature of the TCM treatments used. Moreover, the reported response rate (159 of 248) sounds far from encouraging to me. In fact, it could reflect merely the natural history of the disease or might even hide a detrimental effect of TCM on the infection. What we need are controlled studies, without them, reports like the ones above are mere useless and potentially harmful propaganda for boosting China’s TCM-trade.

18 Responses to Coronavirus: useless and potentially dangerous propaganda for TCM from Chinese officials