A 63-year-old man presented to the emergency department with worsening inter-scapular pain radiating to his neck one day after performing self-manipulation of his cervical spine. He was anti-coagulated with warfarin therapy for the management of his atrial fibrillation. Approximately 48 h after the manipulation, the patient became acutely quadriparetic and hypotensive. Urgent magnetic resonance imaging revealed a multilevel spinal epidural haematoma from the lower cervical to thoracic spine. 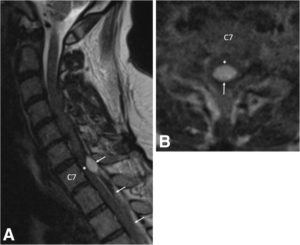 a Pre-operative sagittal T2-weighted MRI of the cervical spine demonstrates an epidural hematoma (arrows) with the cranial extent at the C6/7 level. The hematoma is mixed signal intensity, consistent with various stages of bleeding. Severe spinal cord (asterisk) compression is present at the C7 level. b Pre-operative axial T2-weighted MRI at the C7 level demonstrates a loculated epidural hematoma (arrow) compressing the spinal cord (asterisk). Due to the urgent nature of the MRI, image quality is degraded

With identification of an active bleed and an INR remaining close to 7.0, the patient’s hypercoaguable state was reversed prior to emergency surgery. The patient underwent partial C7, complete T1 and T2, and partial T3 bilateral laminectomy for evacuation of haematoma. Placement of an epidural drainage catheter was also performed.

During the first 6 days following surgery, the patient recovered some function of the upper and lower extremities while undergoing hospital-based physical therapy. Post-operative MRI showed resolution of the haematoma and cord compression without resultant cord damage.

The patient completed a 2-week course of acute interdisciplinary rehabilitation. The epidural drainage catheter remained in place for most of his post-operative stay. His neurogenic bladder with urinary retention resolved. At hospital discharge, the patient’s greatest deficits remained his fine motor skills to his right hand along with residual paraesthesia in his lower extremities. He also exhibited mild dyspraxia with finger-to-nose testing on the right and heel-to-shin testing bilaterally. The patient regained full manual muscle strength of all 4 extremities and ultimately returned to his baseline functional status, which included ambulating independently with a cane and independence with activities of daily living.

The authors concluded that partial C7, complete T1 and T2, and partial T3 bilateral laminectomy was performed for evacuation of the spinal epidural hematoma. Following a 2-week course of acute inpatient rehabilitation, the patient returned to his baseline functional status. This case highlights the risks of self-manipulation of the neck and potentially other activities that significantly stretch or apply torque to the cervical spine. It also presents a clinical scenario in which practitioners of spinal manipulation therapy should be aware of patients undergoing anticoagulation therapy.