Discussing with a homeopath is like playing chess with a pigeon

Some of you might have followed my recent discussion with a homeopath. It followed a typical path, and I decided therefore to try and analyse this exchange here. Perhaps others can learn from this example when debating with homeopaths or other providers of so-called alternative medicine (SCAM).

These conversations often start ‘out of the blue’ by some falsehood being trumpeted on social media. In the present case, the encounter commenced by someone tweeting this message to me: “…remember that asthma trial whose results you faked?” As I did not even remember having ever met the man, I was perplexed. And as I have not faked the study in question nor any other results, I did not think his remark was credible or funny. My mention of the fact that the aggressor was being libellous seemed to bring an end to this unhappy dialogue.

But not for very long. When the man insulted me again – this time very publicly in a UK newspaper – I decided to look into it a bit closer. The aggressor turned out to be in charge of the well-known UK homeopathic pharmacy, Ainsworth, and thus had an overt conflict of interest in defaming my often critical stance on homeopathy. Intriguingly, he had also published his own study of homeopathy. When I assessed this research, it turned out to be both incompetent and unethical. I had hoped that he would defend his work and discuss its limitations with me in a rational fashion. Yet, at this stage, he remained silent.

I then decided to write a further post in the hope of getting some sort of response from him. Alas, my hope was disappointed again. Even when I challenged him and his ROYAL WARRANT directly, he remained silent.

It needed a seemingly unrelated post of mine for him to find his voice:

Dear Ezard
We can all go round in endless circles arguing whether the Earth is Flat, but eventually someone has to venture out in a boat to the horizon to determine the fact. A cursory reading of Hahnemann encourages every student of homoeopathy to gain their own experience empirically. We all know you and your friends on this blog are standing on the shore proclaiming the Earth to be flat, but when are you going to pedal out,to bravely cite actual cases you have treated with homoeopathy as evidence of your position? What the audience reading this wants to know is what experience and knowledge any of you actually have of the subject you spend so much time criticising?

At this stage a had grown a little weary of Mr Pinkus and his innuendos. My response was thus a little impatient:

Dear Tony
I don’t think highly of people who
1) are too daft to spell my name correctly,
2) imply I have no experience in homeopathy,
3) pretend that I make a secret of it, while, in fact, I published this multiple times (i.e. https://www.amazon.co.uk/Scientist-Wonderland-Searching-Finding-Trouble/dp/1845407776),
4) accuse others of being flat earthers, while evidently being one themselves,
5) do all this without declaring their massive conflict of interest.
Best regards
Edzard

What followed was Pinkus’ increasingly irrational attempts to defame me by revealing to the world that I (and other critics of homeopathy) lacked sufficient clinical experience with homeopathy and therefore were not competent to discuss the subject. Explanations by myself and others that,

all fell on deaf ears.

The conclusion of this odd discussion was Pinkus’ triumphant declaration of victory:

I came to this blog to see if anyone in the discussion had any serious intention to discuss the subject of homoeopathy. In order to do this there are certain prerequisites for a sensible debate and one of these is actual knowledge and experience of the subject matter under discussion. To this end I asked if anyone has case they treated in order to discuss the merits and demerits of the experience. No one offered one. I repeated the request and the silence changed to attacks on me even asking.

Any scientist worthy of the challenge, and certainly someone who proudly styles himself as a Professor of CAM with experience and knowledge, would be only too glad to share this with others. Sadly though I have met with rebuke and insult but no evidence to support the opposition to homoeopathy saving some incoherent rant about the needlessness of empirical experience. The cornerstone of Hahnemann’s work on homoeopathy and the one thing he advocated to other doctors. “Don’t take my word for it, prove it to yourself”

When you find the need to attack me to defend your incessant argument that homoeopathy is implausible I really cannot take you seriously.

Here we have a blog hosted by a chap who claims to be an expert on the subject but now claims he hasn’t practiced it for over 40 years. Won’t say what he did when he practised, what he learned and when asked to give at least once case he treated, refuses and creates some diversion to cover his ignorance of the question. Now that’s what I call a charlatan.

I find this exchange rather typical for an argument with  SCAM-fanatics. It follows a fairly standard strategy:

Of course, this is eerily similar to playing chess with a pigeon. 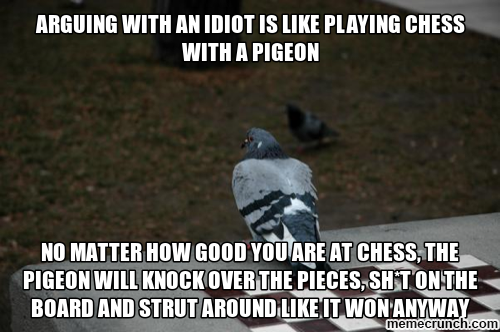 So, what, if anything, can we learn from this?