Update on spinal manipulation for back pain confirms: it is not the treatment of choice

A new update of the current Cochrane review assessed the benefits and harms of spinal manipulative therapy (SMT) for the treatment of chronic low back pain. The authors included all randomised controlled trials (RCTs) examining the effect of spinal manipulation or mobilisation in adults (≥18 years) with chronic low back pain with or without referred pain. Studies that exclusively examined sciatica were excluded.

Forty-seven RCTs including a total of 9211 participants were identified. Most trials compared SMT with recommended therapies. In 16 RCTs, the therapists were chiropractors, in 14 they were physiotherapists, and in 5 they were osteopaths. They used high velocity manipulations in 18 RCTs, low velocity manipulations in 12 studies and a combination of the two in 20 trials.

In general, these results were similar for the intermediate and long term outcomes as were the effects of SMT as an adjuvant therapy. 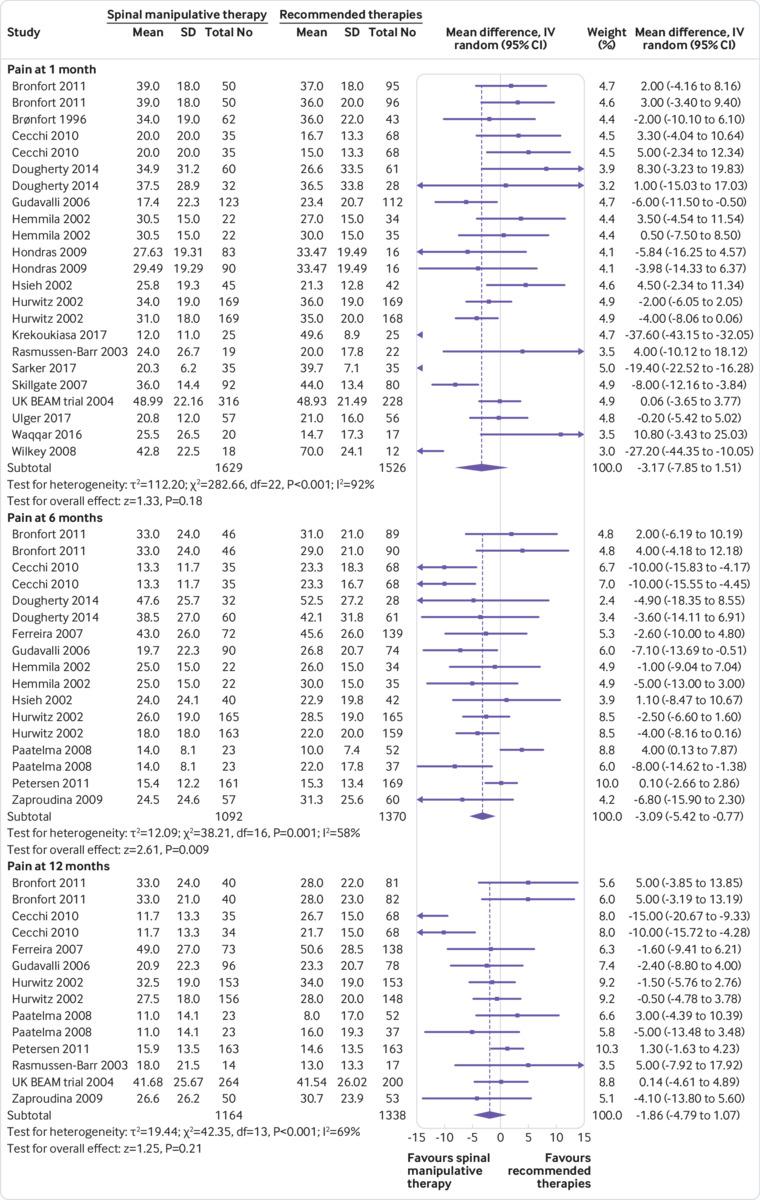 (Mean difference in reduction of pain at 1, 3, 6, and 12 months (0-100; 0=no pain, 100 maximum pain) for spinal manipulative therapy (SMT) versus recommended therapies in review of the effects of SMT for chronic low back pain. Pooled mean differences calculated by DerSimonian-Laird random effects model.)

About half of the studies examined adverse and serious adverse events, but in most of these it was unclear how and whether these events were registered systematically. Most of the observed adverse events were musculoskeletal related, transient in nature, and of mild to moderate severity. One study with a low risk of selection bias and powered to examine risk (n=183) found no increased risk of an adverse event or duration of the event compared with sham SMT. In one study, the Data Safety Monitoring Board judged one serious adverse event to be possibly related to SMT.

The authors concluded that SMT produces similar effects to recommended therapies for chronic low back pain, whereas SMT seems to be better than non-recommended interventions for improvement in function in the short term. Clinicians should inform their patients of the potential risks of adverse events associated with SMT.

This paper is currently being celebrated (mostly) by chiropractors who think that it vindicates their treatments as being both effective and safe. However, I am not sure that this is entirely true. Here are a few reasons for my scepticism:

After carefully considering the new review, my conclusion is the same as stated often before: SMT is not supported by convincing evidence for back (or other) problems and does not qualify as the treatment of choice.

108 Responses to Update on spinal manipulation for back pain confirms: it is not the treatment of choice