I ought to admit to a conflict of interest regarding today’s post:

I am not a fan of Mr Corbyn!

He fooled us prior to the Referendum claiming he was backing Remain and subsequently campaigned less than half-heartedly for it. Not least thanks to him and his sham of a campaign Leave won the referendum. Subsequently, the UK embarked on a bonanza of self-destruction and a frenzy of xenophobia which changed the UK beyond recognition. Currently, Mr Corbyn is doing the same trick again. He had to concede in the Labour manifesto that his party would eventually support a People’s Vote, and now he bends over backwards to avoid doing anything remotely like it. This strategy, together with his rather non-transparent stance on anti-Semitism does it for me. I could not vote for Corbyn in a million years now.

NOTHING TO DO WITH ALTERNATIVE MEDICINE!, I hear you exclaim.

Yes, you are right – but this has:

Some time ago, Corbyn tweeted ‘I believe that homeopathy works for some ppl and that it compliments ‘convential’ meds. they both come from organic matter…’ 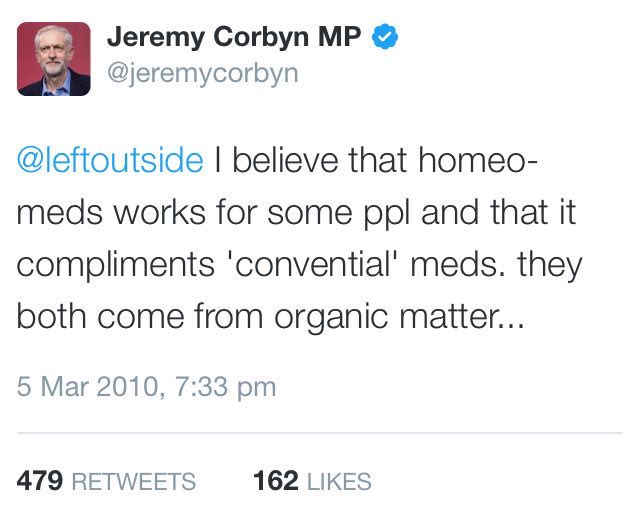 Excuse my frankness, but I find this short tweet embarrassingly stupid (regardless of who authored it).

Yes, I know, you probably think me a bit pedantic here. As I said, I have strong misgivings against Mr Corbyn.

But, even leaving my prejudice aside, I do think that politicians and other people of influence should comment on issues only after they informed themselves about them sufficiently to make good sense. Otherwise they are in danger to merely disclose their ineptitude in the same way as Corbyn did when he wrote the above tweet.

28 Responses to Jeremy Corbyn and homeopathy