The ‘Dunning Kruger Effect’ in action

A recent paper brilliantly shows the DuKE in action; here is its abstract

There is widespread agreement among scientists that genetically modified foods are safe to consume and have the potential to provide substantial benefits to humankind. However, many people still harbour concerns about them or oppose their use. In a nationally representative sample of US adults, we find that as extremity of opposition to and concern about genetically modified foods increases, objective knowledge about science and genetics decreases, but perceived understanding of genetically modified foods increases. Extreme opponents know the least, but think they know the most. Moreover, the relationship between self-assessed and objective knowledge shifts from positive to negative at high levels of opposition. Similar results were obtained in a parallel study with representative samples from the United States, France and Germany, and in a study testing attitudes about a medical application of genetic engineering technology (gene therapy). This pattern did not emerge, however, for attitudes and beliefs about climate change. 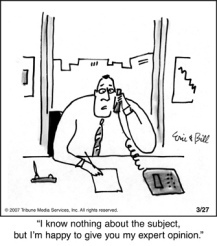 As I have stated before, I suspect the DuKE can explain much of what is going on in the realm of SCAM (so-called alternative medicine). So much so that I am tempted to re-write part of the above abstract as follows:

As extremity of belief in SCAM increases, objective knowledge about science and medicine decreases. In parallel, perceived understanding of science and medicine increases. Extreme believers in SCAM know the least, but think they know the most. Moreover, the relationship between self-assessed and objective knowledge shifts from positive to negative at high levels of SCAM-belief.

Yes, yes, I know. You are absolutely correct: this is little more than speculation! And I also realise, of course, that not everyone can have a full understanding of SCAM, medicine and science; however, if someone has a strong interest in (plus a strong opinion of) these matters, it would be advisable to read up about at least the most basic facts.

In case you disapprove, please do have a look at some of the recent comments on this blog or assess what some of the most famous proponents of SCAM tell the public, and I am confident that you will begin to suspect that my speculation might be not that far off the mark.

9 Responses to The ‘Dunning Kruger Effect’ in action