Yes, one (of many) website explains that dogs benefit from acupuncture in 5 different ways:

1. Pain management is one of the most common uses for acupuncture, often in conjunction with a more traditional treatment plan. Strong medical treatments like chemo, which can cause discomfort, are often paired with acupuncture to help make a pet more comfortable and able to fight the illness.

2. Musculoskeletal problems such as arthritis, hip dysplasia, or nerve injuries can respond to acupuncture. It is often employed during rehabilitation after an injury. Carefully monitoring a healing pet is important; without the feeling of pain, a dog can re-injure him or herself with over-activity.

3. Skin problems like allergic dermatitis, granulomas, or hot spots may respond well to acupuncture treatment because increased circulation can improve healing, while pain reduction will reduce a dog’s overgrooming or itching responses.

4. Gastrointestinal problems like nausea and diarrhea can be aided by the increased blood flow from acupuncture. It may also help normalize digestive activity by stimulating digestive secretions.

5. Respiratory problems like asthma and allergies can benefit from the immune-calming, anti-inflammatory capabilities of acupuncture. 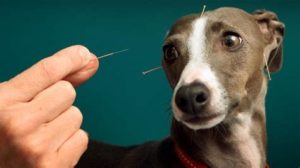 But all of this is based on ‘experience’ (or probably more accurately, the wishful thinking of those who earn money by sticking needles into animals), not evidence!

So, what does the evidence tell us about acupuncture for dogs?

The answer is: next to nothing; there are almost no studies. And this is why this recent paper could be important.

This new study was aimed at quantifying changes in gastric and intestinal emptying times in the conscious dog following gastrointestinal acupoint stimulation.

In a randomised, blinded crossover study, six dogs were fed 30×1.5 mm barium-impregnated polyethylene spheres and underwent: (1) no acupuncture (Control); (2) stimulation of target points PC6 and ST36 (Target) and (3) stimulation of non-target points LU7 and BL55 (Sham). Abdominal radiographs were assessed immediately after feeding the spheres and every hour for 12 hours and their number in the stomach and large intestines was counted.

There you have it: the proof has been presented that acupuncture works in dogs; and if it works in animals, it cannot be a placebo!

Hold on, not so quick!

This was a tiny study, and the effects are small, only temporary and of questionable relevance. It is possible (I’d say even likely) that the finding was entirely coincidental.

I think, I wait until we have more and better data.

4 Responses to Acupuncture for dogs?