Endocrine therapy (ET) is often used to reduce the risk of recurrence in hormone receptor-expressing disease. It is associated with worsening of climacteric symptoms can therefore have a negative impact on the quality of life (QoL) of those affected. Homeopathy is sometimes recommended for management of hot flushes (HF), and a new study aimed to test whether it is effective.

In this multi-centre, double-blind, placebo-controlled RCT, women were included suffering from histologically proven non-metastatic localized breast cancer, with Eastern Cooperative Oncology Group-Performance Status (ECOG-PS) ≤ 1, treated for at least 1 month with adjuvant ET, and complaining about moderate to severe HF. Patients scheduled for chemotherapy, or radiotherapy, or those with associated pathology known to induce HF were excluded. After a 2- to 4-week placebo administration, patients were randomly assigned to receiving the homeopathic medicine complex Actheane® (arm A) or placebo (arm P). Randomization was stratified by adjuvant ET (taxoxifen/aromatase inhibitor) and recruiting site. HF scores (HFS) were calculated as the mean of HF frequencies before randomization, at 4, and at 8 weeks post-randomization (pre-, 4w,- and 8w-) weighted by a 4-level intensity scale. The primary endpoint was the variation between pre- and 4week-HFS. Secondary endpoints included HFS variation between pre- and 8week-HFS. Compliance and tolerance were assessed 8 weeks after randomization, and QoL and satisfaction were assessed at 4- and 8-week post-randomization.

The authors concluded that the efficacy endpoint was not reached, and BRN-01 administration was not demonstrated as an efficient treatment to alleviate HF symptoms due to adjuvant ET in breast cancer patients. However, the study drug administration led to decreased HFS with a positive impact on QoL. Without any recommended treatment to treat or alleviate the HF-related disabling symptoms, Actheane® could be a promising option, providing an interesting support for better adherence to ET, thereby reducing the risk of recurrence with a good tolerance profile.

At the start of their abstract, the authors state that homeopathy might allow a better management of hot flushes (HF). Frankly, I fail to see the evidence for this statement. The only study I know of (by a known advocate of homeopathy) showed no effect of homeopathy.

I am not aware of evidence that this remedy might work.

If there is no plausible rationale for conducting a study, does that not mean it is ethically questionable to do it?

Apart from that, the study seems well-designed. It is not very well presented, but the paper is clear enough. Its results are as one would expect from a rigorous trial of homeopathy. The fact that the authors try to squeeze out some positive messages from this squarely negative study is, of course, pathetic. To mention in the abstract that 4week-HFS decreased for 46 (75%) in A vs 48 (68%) patients (not the primary outcome measure) in P arm is little more than an embarrassing tribute to the sponsor, in my view.

Boiron Canada state on their website that Acteane® is a homeopathic medicine used for the relief of perimenopause and menopause symptoms such as hot flashes, night sweats, sleep disorders, headache, irritability and mood swings. 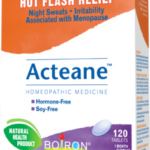 The benefits of Acteane, a new solution for women: