Is music a practical therapy for hypertension? Sadly not, I think

Music therapy is the use of music for therapeutic purposes. Several forms of music therapy exist. They can consist of a patient listening to live or recorded music, or of patients participating in performing music. Music therapy is usually employed to complement other treatments; it is never a curative or causal approach and mostly aimed at inducing relaxation and enhancing physical and emotional well-being, or at promoting motor and communication skills.

There is a paucity of rigorous studies assessing the effectiveness of music therapy for specific condition, not least due to methodological obstacles and funding issues. Several systematic reviews of clinical studies have nevertheless emerged and results are generally encouraging. As for hypertension, the evidence is contradictory whether passive listening to music works. One review concluded that Music may improve systolic blood pressure and should be considered as a component of care of hypertensive patients. And another review revealed a trend towards a decrease in blood pressure in hypertensive patients who received music interventions, but failed to establish a cause-effect relationship between music interventions and blood pressure reduction.

The results showed analogous response of systolic and diastolic arterial pressure in both protocols. HR decreased 60 minutes after medication in the music protocol, while it remained unchanged in the control protocol. The effects of anti-hypertensive medication on SDNN (Standard deviation of all normal RR intervals), LF (low frequency, nu), HF (high frequency, nu) and alpha-1 scale were more intense in the music protocol. Blood pressure readings showed no significant differences between the two groups. 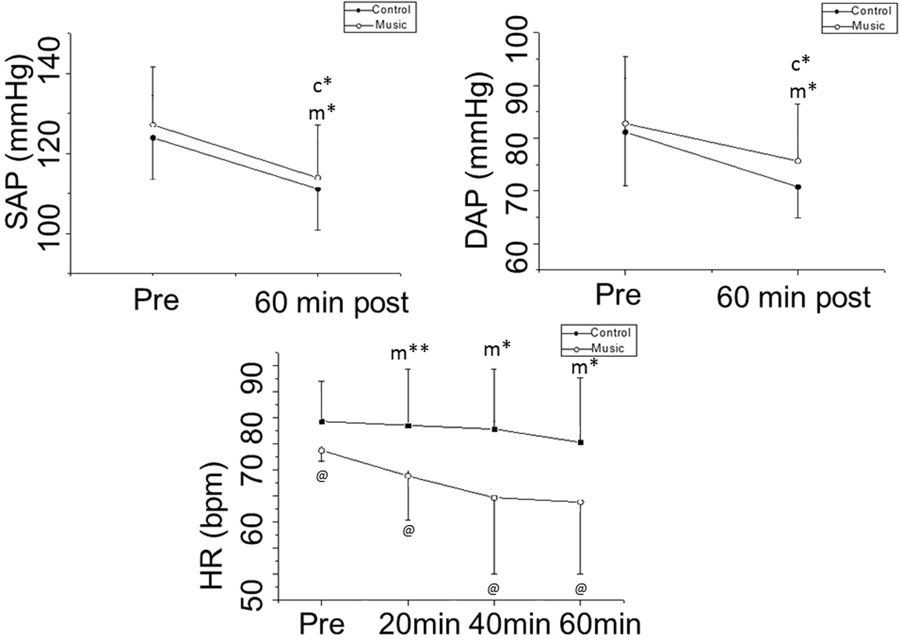 So, there were some acute effects on HRV. But what is the clinical relevance of this effect? I am not sure, and the authors tell us little about this.

Crucially, there was no effect on blood pressure. But the study design might have been ill-suited for detecting one. I think that a much simpler trial with two parallel groups of untreated hypertensives would have been more efficient for this purpose.

As a music-lover, I would like to believe that music can be used therapeutically. Yet, for hypertensives, I find it difficult to see how this could work. Even if passive listening to music had an anti-hypertensive effect, could it be employed in clinical routine? I somehow doubt it; we can hear music for a while, but our daily activities would largely prohibit doing it for prolonged periods (and most likely it would become a nuisance after a while and would put our pressure up rather than down – think of the background music that bothers us in some shops, for instance). And how would it work when we sleep, a time during which blood pressure control can be vital?

As a music-lover, I would also argue that listening to music can be pleasantly relaxing – presumably, the anti-hypertensive effect observed in some trials relies on this effect. But surely, it can also have the opposite effect. If I strongly dislike a piece of music, I might increase my blood pressure. If a piece moves me deeply, it could easily do the same. It is probably only a certain type of music that induces relaxation; and, to make it even more complex, this type might differ from person to person.

So, is music therapy potentially a usable anti-hypertensive?

Somehow, I don’t think so!

5 Responses to Is music a practical therapy for hypertension? Sadly not, I think