Onion water for viral infections? (Or just for bad breath?)

Onion water seems to be all the rage these days. Advocates claim that it is a natural cold and flu remedy that can help the body heal faster and kick symptoms like coughing and congestion. And many consumers who feel threatened by flu, COVID, and various respiratory infections believe them.

But what on earth is onion water? It is precisely what it sounds like: onion immersed in water. Preparation starts with cutting up raw red or yellow onions, placing them into a bowl, and adding water. The fresh onion and water mixture should then soak for about 12 hours. After that, the onion water is ready for consumption. 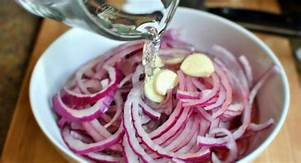 Besides being a recipe for bad breath, can onion water actually relieve any symptoms, or help the body heal from infections?

This may sound encouraging but the review was based mostly on pre-clinical evidence, and the question, therefore, remains: are there any good trial data?

Another recent review included clinical trials (where available) and concluded that “possible bronchodilatory and preventive effects of onion and Qt on asthma and other obstructive respiratory diseases. The effects of the plant and its constituents on lung cancer, lung infections, and allergic disorders were also reported both in experimental and clinical studies. However, before preparing drugs based on A. cepa and its constituents for clinical practice, further standard clinical trials are needed to be performed.”

In other words, compelling trial evidence that preparations from onion are effective against viral infections does not exist.

And what about homeopathy?

Homeopaths frequently use potentised onion as a remedy for conditions that cause eyes to water (because ‘like cures like’). Is there any sound evidence that homeopathic onion remedies are better than a placebo? You probably guessed: the answer is NO!

So, no good evidence for onion, potentised onion, onion water, or any other preparations of onion. My advice, therefore, is to continue using your onions in the kitchen rather than in the medicine cabinet.

13 Responses to Onion water for viral infections? (Or just for bad breath?)