Enzyme therapy: another bogus therapy promoted for cancer. What can be more despicable than preying on the most vulnerable patients?

Bromelain, papain and chymotrypsin are proteolytic enzymes. They can be found in fruits such as pineapple or papaya, but also in the human body, namely in the pancreas. Besides their enzymatic functions, they have long been said to have a wide range of positive health effects. For instance, it is claimed that they reduce side effects and even improve the outcome of cancer therapies. This systematic review examined the existing evidence on the role that these enzymes which are available as food supplements might play in cancer treatment.

A total of 15 studies with 3,008 patients could be included in this systematic review. Patients treated with enzymes were diagnosed with various entities of gastrointestinal, gynecologic, head and neck, and lung cancer as well as hematological malignancies. The therapy concepts included mainly oral intake of enzymes in addition to conventional therapies. Investigated outcomes were: 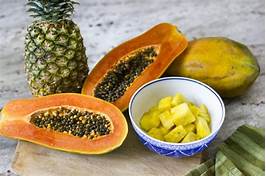 Due to conflicting results and moderate quality of the included studies, the evidence is insufficient to attribute positive effects to enzymes in terms of better tolerability of the various antineoplastic therapies or even improvement in treatment efficacy. In most cases, enzyme therapy was well tolerated; side-effects were mainly gastrointestinal complaints such as diarrhea or meteorism.

The authors concluded that there is no clear therapeutic benefit of enzymes neither as supportive therapy nor as part of antineoplastic therapy.

I fully agree with this conclusion. In fact, in my new book that is just being published, I summarised the evidence for enzyme therapy (and many more alternative cancer therapies) in very similar terms: the evidence to suggest that enzyme therapy might be an effective treatment for any type of cancer is less than convincing.

I find it highly irresponsible to claim otherwise. Cancer patients are vulnerable and can easily be tempted to opt for one of the many quack treatments that are said to be both effective and free of nasty adverse effects. If they do try such options, they usually pay dearly, and not just in monetary terms.

3 Responses to Enzyme therapy: another bogus therapy promoted for cancer. What can be more despicable than preying on the most vulnerable patients?