Epidemiological studies on the association between coffee intake, arguably a herbal remedy, and cancer risk have yielded inconsistent results. To summarize and appraise the quality of the current evidence, researchers conducted an umbrella review of existing findings from meta-analyses of observational studies.

They searched PubMed, Embase, Web of Science and the Cochrane database to obtain systematic reviews and meta-analyses of associations between coffee intake and cancer incidence. For each association, they estimated the summary effect size using the fixed- and random-effects model, the 95% confidence interval, and the 95% prediction interval. We also assessed heterogeneity, evidence of small-study effects, and excess significance bias.

Twenty-eight individual meta-analyses including 36 summary associations for 26 cancer sites were retrieved for this umbrella review. A total of 17 meta-analyses were significant at P ≤ 0.05 in the random-effects model. For the highest versus lowest categories, 4 of 26 associations had a more stringent P value (P ≤ 10− 6). Associations for five cancers were significant in dose-response analyses. Most studies (69%) showed low heterogeneity (I2 ≤ 50%). Three and six associations had evidence of excessive significance bias and publication bias, respectively. Coffee intake was inversely related to the risk of liver cancer and endometrial cancer and was characterized by dose-response relationships. There were no substantial changes when the researchers restricted analyses to a meta-analysis of cohort studies. 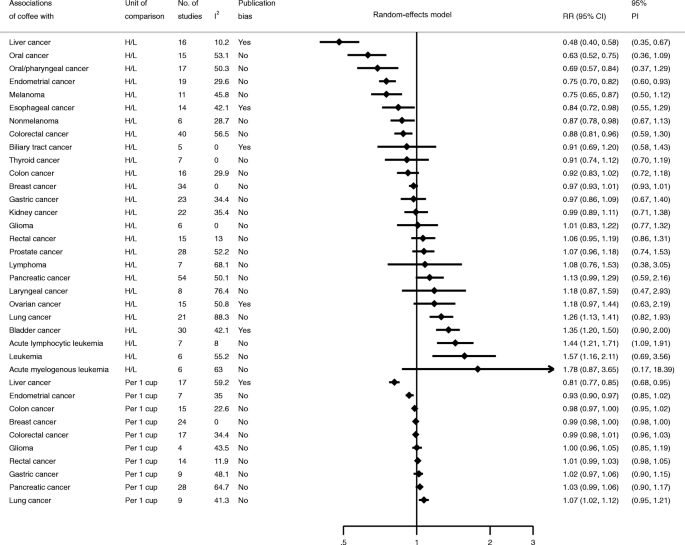 The authors concluded that there is highly suggestive evidence for an inverse association between coffee intake and risk of liver and endometrial cancer. Further research is needed to provide more robust evidence for cancer at other sites.

This is an interesting analysis that begs many questions. Let me just make four brief points: