Chiropractic spinal manipulation for a newborn 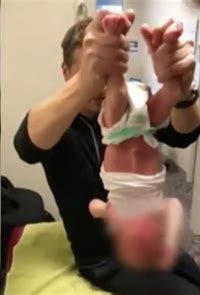 Chiropractors have a thing about treating children, babies and infants – not, I suspect, because it works but because it fills their bank accounts. To justify this abuse, they seem to go to any lengths – even to extrapolating from anecdote to evidence. This recently published case-report, for instance, described the chiropractic care of a neonate immediately post-partum who had experienced birth trauma.

The attending midwife noted the infant had an asynclitic head presentation at birth and as a result was born with an elongation of the occiput due to cranial molding, bilateral flexion at the elbows and shoulders with decreased range of motion in the cervical spine with tongue and lip tie. Oedema of the occiput with bruising was notable along with hypertonicity of cervical musculature at C1, hypertonicity (bilaterally) of the pectoral and biceps muscles, blanching and tension of lip tie, decreased suck reflex and tongue retraction with sucking, fascial restrictions at the ethmoid bones, at the occipital condyles (bilaterally), as well as at the shoulders and clavicles, bilaterally. An anterior subluxation of left sphenoid was noted.

The infant was cared for with chiropractic including a sphenobasilar adjustment. Following this adjustment, significant reduction in occipital edema was noted along with normal suck pattern and breastfeeding normalized.

The authors concluded that this case report provides supporting evidence that patients suffering from birth trauma may benefit from subluxation-based chiropractic care.

Oh no, this case report provides nothing of the sort! If anything, it shows that some chiropractors are so deluded that they even publish their cases of child abuse. The poor infant would almost certainly have developed at least as well without a chiropractor having come anywhere near him/her. And if the infant had truly been in need of treatment, then not by a chiropractor (who has no knowledge or training in diagnosing or treating a new-born), but by a proper paediatrician.

3 Responses to Chiropractic spinal manipulation for a newborn