Homeopathy for urticaria? No!

According to the investigators, the primary objective this study (thanks again Dr Jens Behnke) was to evaluate the effectiveness of homoeopathic remedies in improving quality of life (QoL) of chronic urticaria (CU) patients.

The study population included patients attending the Outpatient Department of State Homoeopathic Dispensary, Ahmadpur, India. Quality of Life (QoL) questionnaire (CU-Q2oL) and average Urticaria Activity Score for 7 days (UAS7) questionnaires were filled at baseline and 3rd, 6th, 9th and 12th months. The study included both male and female patients diagnosed with CU. Eighteen homoeopathic remedies were used. The individualised prescriptions were based on the totality of each patient’s symptoms.

A total of 134 patients were screened and 70 were diagnosed with CU and enrolled in the study. The results were analysed under modified intention-to-treat approach. Significant difference was found in baseline and 12th month CU-Q2oL score. Apis mellifica (n = 10), Natrum muriaticum (n = 9), Rhus toxicodendron (n = 8) and Sulphur (n = 8) were the most frequently used remedies. 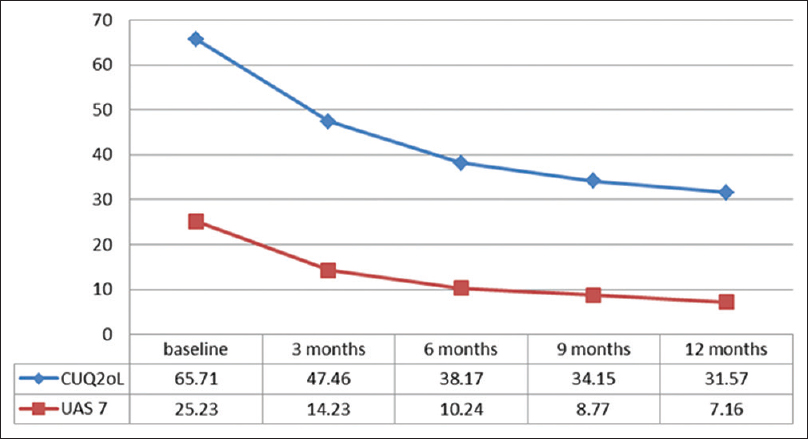 The authors concluded that homoeopathic medicines have potential to improve QoL of CU patients by reducing pruritus, intensity of wheals, swelling, nervousness, and improve sleep, mood and concentration. Further studies with more sample size are desirable.

The primary objective of this study was, I would argue, to promote the erroneous idea that homeopathy is an effective therapy. It cannot have been to evaluate its effectiveness, because for such an aim one would clearly have needed a control group. Without it, the findings are consistent with the following facts: