Is TENS an effective therapy for pain?

I know, transcutaneous electrical nerve stimulation (TENS) is not really a so-called alternative medicine (SCAM) but it is used by many SCAM practitioners and pain patients. It is, therefore, worth knowing whether it works.

This systematic review investigated the efficacy and safety of transcutaneous electrical nerve stimulation (TENS) for the relief of pain in adults. All randomized clinical trials (RCTs) were considered which compared strong non-painful TENS at or close to the site of pain versus placebo or other treatments in adults with pain, irrespective of diagnosis.

Reviewers independently screened, extracted data, and assessed the risk of bias (RoB, Cochrane tool) and certainty of evidence (Grading and Recommendations, Assessment, Development, and Evaluation). The outcome measures were the mean pain intensity and the proportions of participants achieving reductions of pain intensity (≥30% or >50%) during or immediately after TENS. Random effect models were used to calculate standardized mean differences (SMD) and risk ratios. Subgroup analyses were related to trial methodology and characteristics of pain. 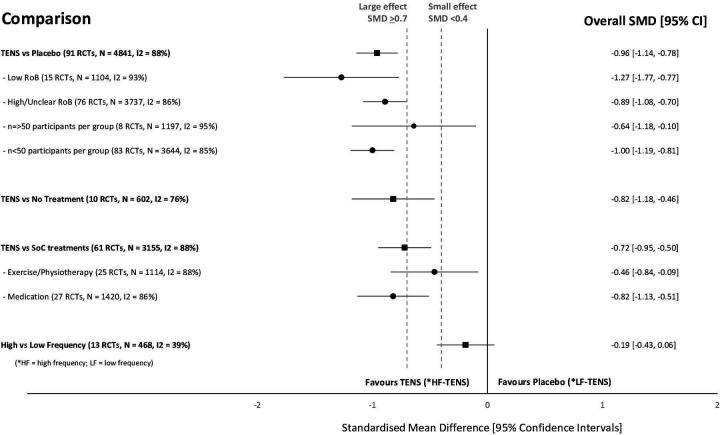 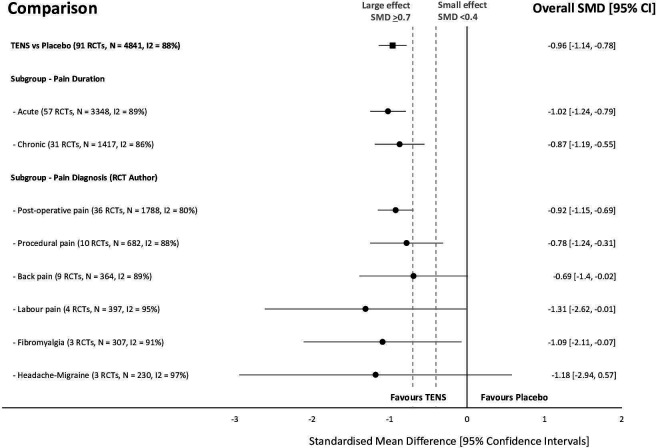 The authors concluded that there was moderate-certainty evidence that pain intensity is lower during or immediately after TENS compared with placebo and without serious adverse events.

This is an impressive review, not least because of its rigorous methodology and the large number of included trials. Its results are clear and convincing. In the words of the authors: “TENS should be considered in a similar manner to rubbing, cooling or warming the skin to provide symptomatic relief of pain via neuromodulation. One advantage of TENS is that users can adjust electrical characteristics to produce a wide variety of TENS sensations such as pulsate and paraesthesiae to combat the dynamic nature of pain. Consequently, patients need to learn how to use a systematic process of trial and error to select electrode positions and electrical characteristics to optimise benefits and minimise problems on a moment to moment basis.”

11 Responses to Is TENS an effective therapy for pain?