Tinospora cordifolia, a plant used in Ayurvedic medicine, is a widely grown glabrous, deciduous climbing shrub which has been described in traditional medicine texts to have a long list of health benefits. It contains diverse phytochemicals, including alkaloids, phytosterols, glycosides. 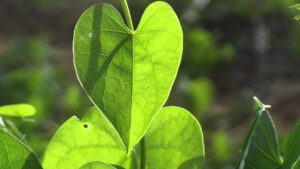 Preparations utilize the stem and root of the plant which is consumed in the form of capsules, powder, or juice or in an unprocessed form. Its benefits are said to include anti-inflammatory, anti-pyretic properties, anti-viral and anti-cancer, and immune-boosting properties. The latter alleged activity made it popular during the pandemic. Indian researchers recently reported 6 patients who presented with liver injuries after taking Tinospora cordifolia.

A previously healthy 40- year-old male without comorbidities, presented with jaundice of 15 days duration. On persistent probing, he gave a history of consumption of TC plant twigs (10 to 12 pieces) boiled with cinnamon and cloves in half a glass of water, once in two days for 3 months prior to presentation. USG of the abdomen was unremarkable. He underwent a percutaneous liver biopsy which showed features of the hepatocellular pattern of liver injury – with lymphoplasmacytic cell infiltrate, interface hepatitis, and foci of necrosis – suggesting the diagnosis of DILI with autoimmune features. He was managed with standard medical treatment (SMT) which included multivitamins and ondansetron for associated nausea. He was followed up for 5 months till the complete resolution of symptoms and normalization of liver function.

A 54- year -old female, with type 2 diabetes mellitus, presented with jaundice for 1 week. A 7-month history of unsupervised consumption of TC plant (1 twig per day), which was boiled and extract consumed – was obtained. Evaluation for cause revealed a positive ANA (1:100), negative ASMA, negative viral markers, and normal IgG. USG features showing a liver with coarse echotexture, spleen of 13.4 cm, and minimal free fluid in the abdomen. A percutaneous liver biopsy showed a mixed pattern of liver injury (hepatocellular and cholestatic) with features of lymphocytic, neutrophilic and eosinophilic infiltrate, prominent interface hepatitis, intracytoplasmic and canalicular cholestasis, and altered architecture. She was managed with SMT. In view of chronicity, she was started on oral prednisolone in a dose of 40 mg which was tapered over a period of 10 weeks following which there was the resolution of her symptoms, improvement in LFTs and she was advised regular follow up.

A 38- year-male with Beta-thalassemia minor presented with jaundice of 1-week duration. He gave a history of consumption of 3-4 TC plant twigs – boiled and extract consumed 15 ml/day for 6 months prior to presentation. Work up for the etiology showed a positive ANA (1:100). USG showed hepatomegaly (16 cm) with diffuse fatty infiltration and splenomegaly (17.3 cm). A percutaneous liver biopsy suggested the diagnosis of drug-induced hepatitis with a hepatocellular pattern of liver injury along with moderate lymphocytic infiltrate admixed with plenty of eosinophils and few plasma cells, mild interface hepatitis. He was managed with SMT and followed up until complete resolution of symptoms and LFTs.

A 62- year-old female with type 2 diabetes mellitus, presented with complaints of malaise, reduced appetite and yellowish discoloration of urine, eyes, and skin with abdominal distension for 15 days. She confirmed consumption of commercially available syrup containing TC plant – 15 ml/day, every alternate day for a month, prior to the onset of her symptoms. Investigations revealed a positive ANA (1:320) and ASMA. Imaging showed hepatomegaly and ascites. A trans-jugular liver biopsy suggested a diagnosis of autoimmune hepatitis suggested by lymphoplasmacytic infiltrate with eosinophils and neutrophils, as well as interface hepatitis. There was also cirrhosis suggested by marked lobular disarray, pseudo-glandular transformation, and bridging hepatic fibrosis. She was treated with standard medical therapy including a low salt diet and diuretics for ascites and started on oral prednisolone 40 mg per day. She initially showed clinical improvement and improving trends of LFTs. However, on tapering of steroids, she came back with increasing ascites and oliguria and succumbed to hepato-renal syndrome around 120 days from the first presentation.

A 56- year-old female with hypothyroidism presented with yellowish discoloration of urine and eyes. A short, 3-week history of consumption of TC plant boiled extract of 1 twig, 2 to 3 days/week was obtained. Standard investigations for etiology were negative except for a high serum IgG of 2570 mg/dl. The auto-immune markers were negative. USG showed mild ascites, nodular liver, and spleen of 12.3 cm. A trans-jugular liver biopsy showed lymphoplasmacytic infiltrate admixed with plasma cells and eosinophils, moderate interface hepatitis, fibrosis, and altered architecture suggestive of auto-immune cirrhosis. SMT and tapering doses of prednisolone starting with 40 mg orally over 6 weeks led to the resolution of symptoms with the improvement of LFT. She was continued on a maintenance dose of steroids and advised to close follow-up.

A 56- year-old female, with hypothyroidism presented with jaundice of 20 days duration. History of TC plant formulation in the form of commercially available tablets – 1 pill a day, for 3 months prior to presentation was obtained. Routine evaluation for the cause of liver injury showed a weakly positive ASMA and a high serum IgG (2045 mg/dl). ANA was negative. USG showed diffuse heterogeneous echotexture of liver and normal-sized spleen. A percutaneous liver biopsy showed chronic hepatitis with lymphoplasmacytic infiltrate, interface hepatitis with significant bridging fibrosis suggesting the possibility of autoimmune hepatitis. She was managed with SMT, leading to complete symptomatic and biochemical resolution. There was no relapse of hepatitis after stopping TC and a follow-up of 2 months.

The authors believe that the liver injury seen in these patients was caused by autoimmune-like hepatitis due to consumption of TC, or the unmasking of latent chronic auto-immune liver disease. Most drug-induced autoimmune liver injuries are an acute idiosyncratic reaction which was also supported by the fact that one patient taking the drug for only 3 weeks on alternate days.