Has homeopathy caused the dramatic decline of COVID-19 cases in India?

The drop in cases and deaths due to COVID-19 infections in India has been attributed to India’s national policy of using homeopathy. Early in the epidemic, the national “Ministry of AYUSH, recommended the use of Arsenic album 30 as preventive medicine against COVID-19. Its prophylactic use has been advised in states like Karnataka, Tamil Nadu, Kerala, and Maharashtra. The ‘OFFICIAL HOMEOPATHY RESOURCE’ is now claiming that homeopathy is the cause of the observed outcome:

And now the results of that policy and use are clear, even though skeptics and other scientists in the conventional paradigm are mystified as to why the drop is so dramatic. They know nothing about homeopathy and its history of successfully treating epidemics.

“Scientists are trying to work out why coronavirus cases in India are falling when at one point it looked like the country might overtake the US as the worst-hit nation.
In September the country was reporting some 100,00 new cases per day, but that went into decline in October and is now sitting at around 10,000 per day – leaving experts struggling to explain why.”

According to my sources, the number of daily new cases in India rose steadily to reach its maximum of almost 100000 new cases per day in mid-September. Thereafter, the figure fell in almost the same fashion as they had previously risen. 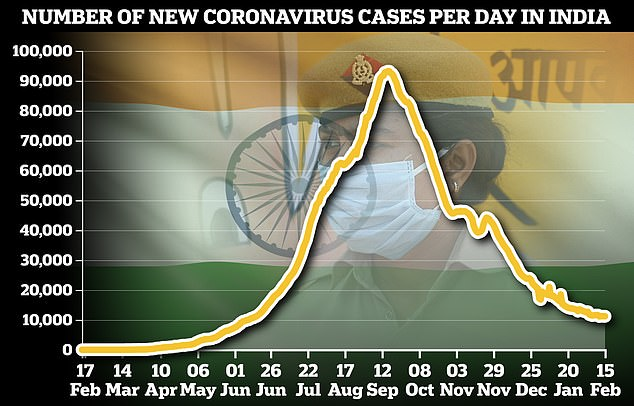 Currently, they have reached a plateau of about 13000 cases per day, and around 100 patients per day are reported to dies of COVID-19 every day. There are several possible contributors to these relatively positive outcomes:

Which of these explanations are valid?

Most likely, it is not one but several working together. However, the hypothesis that homeopathy has anything to do with the course of the pandemic in India seems most unlikely. Apart from the fact that highly diluted homeopathic remedies are implausible and have not been shown to be effective, the timing of events is clearly against this explanation: if I am correctly informed, the homeopathic remedies were dished out months before the decline in cases started. In fact, simply going by the timing, one would need to assume that homeopathy led to the enormous increase before the remarkable drop.

Of course, it would be interesting to see the results of the homeopathy trials that allegedly started in India about 8 months ago. They could bring us closer to the truth. But somehow, I am not holding my breath.

117 Responses to Has homeopathy caused the dramatic decline of COVID-19 cases in India?