Let’s celebrate it by looking at the latest ‘cutting edge’ research on the world’s most commercially successful homeopathic remedy, Oscillococcinum®, a preparation of duck organs that are so highly diluted that not one molecule per universe is present in the end-product. It is therefore surprising to read that this new investigation finds it to be effective.

According to its authors, the goal of this controlled observational study was “to investigate the role of the homeopathic medicine in preventing respiratory tract infections (RTIs)”. The ‘study’ was not actually a study but a retrospective analysis of patients’ medical records. It examined 459 patients who were referred to a respiratory diseases specialist in Italy. Subjects who had taken any form of flu vaccine or any other type of vaccine (immuno-stimulants, bacterial lysates, or similar) were excluded from the study.  248 patients were treated with the homeopathic medicine, while 211 were, according to one statement by the authors, not treated. The latter group was deemed to be the control group. All patients were followed-up for at least 1 year, and up to a maximum of 10 years.

A significant reduction in the frequency of onset of RTIs was found in both the homeopathic medicine and untreated groups. The reduction in the mean number of RTI episodes during the period of observation vs. the year before inclusion in the study was significantly greater in the homeopathic-treated group than in untreated patients (-4.76 ± 1.45 vs. -3.36 ± 1.30; p = 0.001). The beneficial effect of the homeopathic medicine was not significantly related to gender, age, smoking habits or concomitant respiratory diseases when compared to the effect observed in untreated patients. The number of infections during the follow-up period is plotted in the graph. 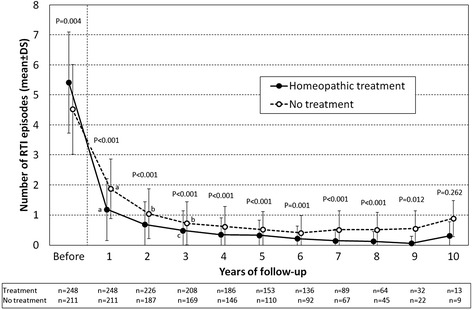 The authors concluded that these results suggest that homeopathic medicine may have a positive effect in preventing RTIs. However, randomized studies are needed before any firm conclusion can be reached.

This could well be the worst study of homeopathy, an area where there is no shortage of poor research, that I have seen for a long time. Here are some of its most obvious problems:

My favourite alternative explanation for the reported findings – and there are many that have nothing to do with homeopathy – goes like this: some patients did not comply because their condition did not respond to homeopathy. These were the ones who were, on average, more severely ill. They needed something better than a homeopathic placebo and they therefore became the ‘control group’. As the differed systematically from the verum group, it would be most extraordinary, if they did not show different findings during follow-up.

So, is there nothing interesting here at all?

Not really…hold on, here is something: “The corresponding author thanks the Scientific Department of Laboratories Boiron S.r.l. (Milan, Italy) for funding the independent statistical analysis made at the Department of Medical and Surgical Sciences of the Alma Mater Studiorum-University of Bologna (Bologna, Italy).”