Musculoskeletal disorders (MSDs) are highly prevalent, burdensome, and putatively associated with an altered human resting muscle tone (HRMT). Osteopathic manipulative treatment (OMT) is commonly and effectively applied to treat MSDs and reputedly influences the HRMT. Arguably, OMT may modulate alterations in HRMT underlying MSDs. However, there is sparse evidence even for the effect of OMT on HRMT in healthy subjects.

A 3 × 3 factorial randomized trial was performed to investigate the effect of myofascial release (MRT), muscle energy (MET), and soft tissue techniques (STT) on the HRMT of the corrugator supercilii (CS), superficial masseter (SM), and upper trapezius muscles (UT) in healthy subjects in Hamburg, Germany. Participants were randomised into three groups (1:1:1 allocation ratio) receiving treatment, according to different muscle-technique pairings, over the course of three sessions with one-week washout periods. We assessed the effect of osteopathic techniques on muscle tone (F), biomechanical (S, D), and viscoelastic properties (R, C) from baseline to follow-up (primary objective) and tested if specific muscle-technique pairs modulate the effect pre- to post-intervention (secondary objective) using the MyotonPRO (at rest). Ancillary, we investigate if these putative effects may differ between the sexes. Data were analysed using descriptive (mean, standard deviation, and quantiles) and inductive statistics (Bayesian ANOVA). 59 healthy participants were randomised into three groups and two subjects dropped out from one group (n = 20; n = 20; n = 19–2). The CS produced frequent measurement errors and was excluded from analysis. OMT significantly changed F (−0.163 [0.060]; p = 0.008), S (−3.060 [1.563]; p = 0.048), R (0.594 [0.141]; p < 0.001), and C (0.038 [0.017]; p = 0.028) but not D (0.011 [0.017]; p = 0.527). The effect was not significantly modulated by muscle-technique pairings (p > 0.05). Subgroup analysis revealed a significant sex-specific difference for F from baseline to follow-up. No adverse events were reported. 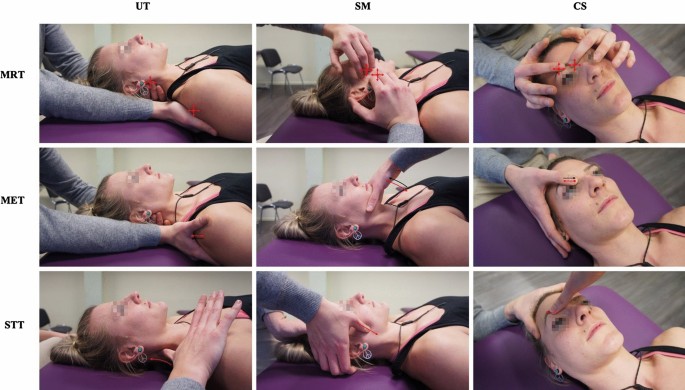 The authors concluded that OMT modified the HRMT in healthy subjects which may inform future research on MSDs. In detail, MRT, MET, and STT reduced the muscle tone (F), decreased biomechanical (S not D), and increased viscoelastic properties (R and C) of the SM and UT (CS was not measurable). However, the effect on HRMT was not modulated by muscle–technique interaction and showed sex-specific differences only for F.

I think that this study merits a few comments: