Zinc for the prevention or treatment of acute viral respiratory tract infections in adults? A new systematic review

Zinc has been in the limelight recently. The reason is that it has been recommended as a preventative and/or treatment of COVID infections. The basis for such recommendations has been some trial evidence suggesting it is effective for viral respiratory tract infections (RTIs). But the evidence has been full of contradictions which means, we need a systematic review that critically evaluated the totality of the available data.

This systematic review was aimed at evaluating the benefits and risks of zinc formulations compared with controls for the prevention or treatment of acute RTIs in adults.

Seventeen English and Chinese databases were searched in April/May 2020 for randomized clinical trials (RCTs), and from April/May 2020 to August 2020 for SARS-CoV-2 RCTs. Cochrane rapid review methods were applied. Quality appraisals used the Risk of Bias 2.0 and Grading of Recommendations, Assessment, Development and Evaluation (GRADE) approach. 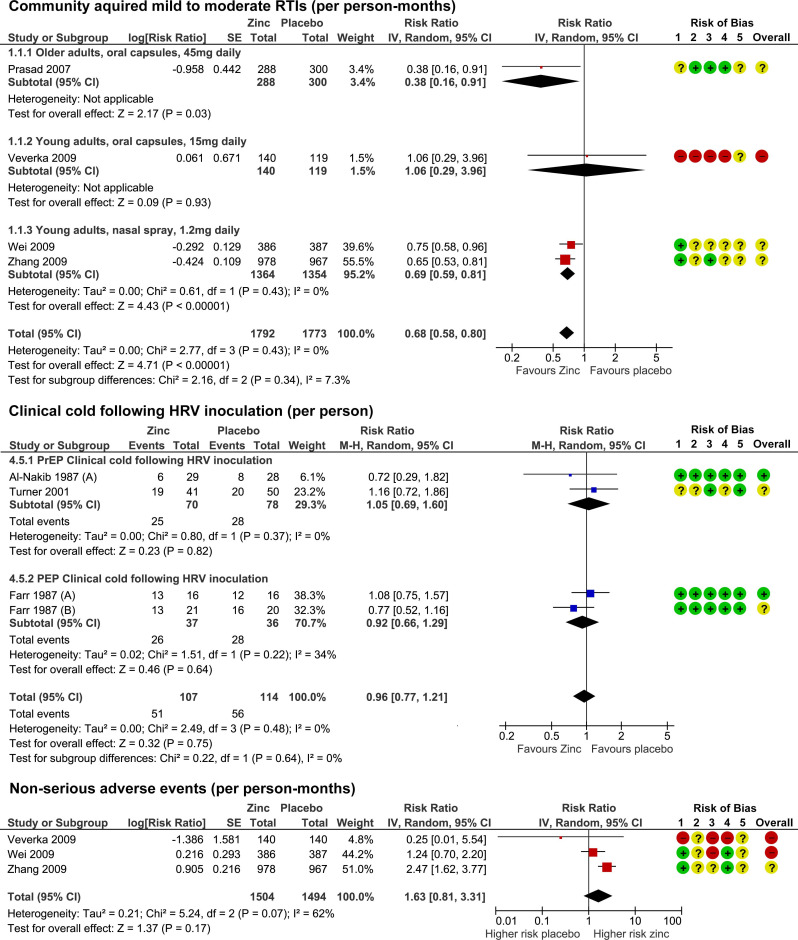 The authors concluded that in adult populations unlikely to be zinc deficient, there was some evidence suggesting zinc might prevent RTIs symptoms and shorten duration. Non-serious AEs may limit tolerability for some. The comparative efficacy/effectiveness of different zinc formulations and doses were unclear. The GRADE-certainty/quality of the evidence was limited by a high risk of bias, small sample sizes and/or heterogeneity. Further research, including SARS-CoV-2 clinical trials is warranted.

The authors provide a short comment on the assumed mode of action of zinc. The rationale for topical intranasal and sublingual zinc is based on the in vitro effects of zinc ions that can inhibit viral replication, stabilize cell membranes and reduce mucosal inflammation. Other conceivable mechanisms include the activation of T lymphocytes, monocytes, and granulocytes.

The authors also remind us to be cautious: clinicians and consumers need to be aware that considerable uncertainty remains regarding the clinical efficacy of different zinc formulations, doses, and administration routes, and the extent to which efficacy might be influenced by the ever changing epidemiology of the viruses that cause RTIs. The largest body of evidence comes from sublingual lozenges and zinc gluconate and acetate salts, suggesting these are suitable choices. Yet, this does not mean that other administration routes and zinc salts are less effective. The new evidence on the prophylactic effects of low-dose nasal sprays adds weight to the otherwise inconclusive findings from the handful of RCTs evaluating zinc nasal sprays or gels for acute treatment. A minimum therapeutic dose for zinc is also yet to be determined. An earlier review suggested the minimum dose for sublingual lozenges is 75 mg. However, the present analysis does not support this conclusion. Furthermore, a daily oral dose of 15 mg has been shown to upregulate lymphocytes within days, so it is plausible that much lower doses might also be effective.

10 Responses to Zinc for the prevention or treatment of acute viral respiratory tract infections in adults? A new systematic review