Is Priti Patel’s ‘Rwanda Project’ similar to what the Nazis had planned for European Jews?

On this blog, I have almost exclusively written about so-called alternative medicine (SCAM), and I intend to continue along these lines. But today, I have to make an exception. The reason is the UK government’s ‘Rwanda Project’. I heard about it this morning while listening to the BBC, and I am too shocked to not write about it.

Already in 2020, it had been reported that the UK home secretary, Priti Patel, had asked officials to look into the possibility of sending all asylum seekers to Ascension, an isolated volcanic British island south of the Equator in the Atlantic Ocean.[1] At the time, the idea was met with much criticism and opposition. Today she is about to announce that a modification of her plan will, in fact, be implemented; our government is about to unveil plans to send ‘illegal migrants’ who reach Britain to Rwanda:

Flying asylum seekers to Rwanda to be processed is “despicable” and “evil”, critics have said as they hit out at government plans expected to be announced on Monday. ITV News has seen a government document that raises issues over the legality of such a policy, as ministers attempt to tackle small boat crossings of the Channel. The government document says the policy would carry the risk of legal challenges but is possible under current legislation should the government wish to push ahead. Boris Johnson is set to argue on Thursday that action is needed to combat the “vile people smugglers” turning the ocean into a “watery graveyard”. Many details of the expected announcement, such as whether it would apply just to those who arrived by what the government calls illegal means, remain unclear. The document seen by ITV News also states that any agreement of this nature would require the government to financially incentivise whichever country it reaches a deal with. Initial estimates had the policy costing in the tens of millions of pounds, but the document says this has been revised to the hundreds of millions of pounds.

The plan sounds utterly cynical, irrational, illegal, and expensive; and again there is an outrage; QC tweeted, for instance, this: “And if an asylum applicant who’s been dumped in Rwanda is then refused, what happens then? The whole thing is the stuff of nightmares. It feels like things are becoming increasingly dystopian as the days pass. Why oh why can’t we have some creative and humane people in charge.”

One might well ask, where does such an inhumane concept come from?

It turns out that it resembles an idea of the Third Reich that was equally baffling and similarly cruel.

Anticipating the German invasion of France in 1940, the German diplomat, Franz Rademacher, developed his Madagascar project, a bizarre plan to rid Europe of all Jews. It envisaged that:

The plan may now sound ridiculous but, in 1940, it was seriously considered by the Nazi leadership. In June of that year, Rademacher, who then was the head of the German Foreign Ministry’s Jewish Department, presented the idea to his boss, Joachim von Ribbentrop, who then explained it to Hitler. Hitler was sufficiently impressed to discuss it with Mussolini. Rademacher wrote that “The approaching victory gives Germany the possibility, and in my view also the duty, of solving the Jewish question in Europe. The desirable solution is: All Jews out of Europe.” [2]

When Reinhard Heydrich, chief of the Reich Main Security Office, learned about the “Madagascar Project”, he highjacked it and swiftly put Adolf Eichmann in charge of it. On August 15, 1940, Eichmann published a pamphlet on the “Madagascar Project.” It envisaged that the deportation of the Jews would be carried out by the British merchant marine, after the anticipated invasion and defeat of the United Kingdom. Two ships per day would then leave Europe for Madagascar, each one carrying 1,500 Jews. In just a few years, Europe would thus become ‘Juden-frei’, free of Jews.

The Madagascar plan envisaged turning Madagascar into a monumental concentration camp under German control. The island is merely 228,900 square miles in size and would not have provided sufficient room for millions. It was therefore understood that many of the prisoners would perish, not least because of the lack of food, housing and healthcare as well as the difficult climate. 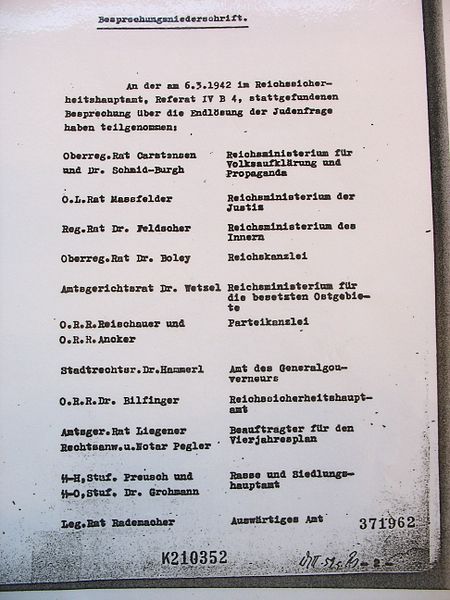 Eventually, the Madagascar plan had to be abandoned. What was decided subsequently with Rademacher’s cooperation about the fate of the Jews, the ‘final solution’, was even more unspeakably outrageously abhorrent.

The main players involved in the Madagascar project did all perish:

Only Rademacher survived. After the war, he was imprisoned by British military police who mistook him for ‘small fry’ and promptly released him. In 1952, he was put on trial in West Germany for the murders of Jews he had supervised in Serbia. Yet, aided by a network of Nazi sympathizers, he managed to flee to Syria. The German court then convicted him in his absence and sentenced him to 3 years and 5 months imprisonment. In 1962, an Israeli spy delivered a letter bomb to Rademacher in Syria who, however, remained unharmed. In 1966, Rademacher returned voluntarily to West Germany and was promptly re-arrested. This time, he was sentenced to five and half years, but never actually served a prison sentence. In 1971, the German high court overruled the former judgment and ordered a new trial to take place. However, Rademacher died on 17 March 1973, before it could take place.[3]

I hope that I am wrong and that the UK government’s plan is not similar to the Nazi’s “Madagascar Project”. Maybe it is just a PR stunt of our PM to distract from his very own lawbreaking, and the ‘Rwanda project’ will never be implemented. In any case, we should urgently remind everyone of George Santayana’s wise words: “Those who cannot remember the past are condemned to repeat it.”

5 Responses to Is Priti Patel’s ‘Rwanda Project’ similar to what the Nazis had planned for European Jews?