Traditional European Medicine: what is it and do we need it?

Traditional European Medicine (TEM) is an increasingly popular yet ill-defined term. Like Traditional Chinese Medicine (TCM), it encompasses all the traditional therapies from the respective region. One website describes it with this very odd graph: 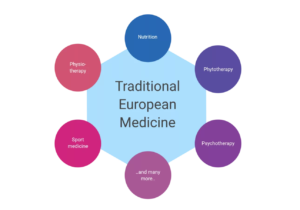 On Medline, I found only very few papers on TEM. One article reported about a congress based on the concept of TEM but confusingly called it ‘European Traditional Medicine (ETM). Here are a few excerpts:

… the aim of this congress is to explore and survey, very old and modern traditional based therapies and treatments curing the principles of scientific medicine (1). Discussions of the links between ETM and other traditional medicines therefore are mandatory, particularly when considering the importance of traditionally based therapies that are still a source of primary health care to about 70 percent of the world’s population. Connections between traditional medicine and human health have been addressed and commented upon by many national and international political and sanitary bodies because: a) the good health of populations requires enlightened management of our social resources, economic relations, and of the natural world, and b) that many of today’s public-health issues have their roots in lack of scientifically sustainable holistic approach to the patient c) many socioeconomic inequalities and irrational consumption patterns that jeopardize the future economic sustainability of health.

In the same context the conventional biomedical approach to health is based on methods of diagnosing and treating specific pathologies: one pathogen = one disease, an approach that does not take into account connections between diseases, humanity, and some psychological aspects of suffering, and other socioeconomic factors such as poverty and education, and even the connections between disease and the environment in which sick people lives (2,3).

Other authors, like the one on this website, are much more concrete. Again, a few excerpts must suffice: 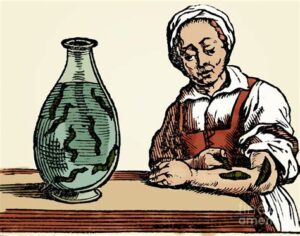 Bloodletting
When bloodletting according to Hildegard von Bingen max. 150 ml of blood taken. It is one of the most valuable and fastest detoxification options in TEM. In some people, no blood comes, because the body has no need to excrete something. For others, the doctor may say a lot about human health after the blood has been left for about 2 hours. If the serum is yellowish or whitish, this indicates excess fats. If certain threads form, they are signs of inflammation. Then the doctor gives recommendations for certain herbs and applications.

Wraps and packs
Whether neck wrap or hay flower sack. In TEM, there are many natural remedies made from natural materials (clay, pots) and herbs that support the body’s self-healing powers.

Wyda instead of yoga
Wyda is a holistic philosophy that is about getting in touch with yourself. In doing so, one can relax through flowing exercises and energy sounds, strengthen one’s mind or stimulate the metabolism. The exercises are similar in some ways to yoga. Here you can learn more about European yoga!

Which archetype are you? 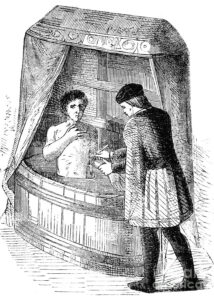 In Traditional European Medicine (TEM), the archetype of a human is first determined so that the TEM doctor can coordinate the treatments. There are 4 temperatures:

Sanguine: He is active, open-hearted, energetic and mostly optimistic and cheerful. He is not resentful and does what he enjoys.
Suitable use: cool applications such as chest and liver wrap, whole body rubbings with grape seed and lemon balm oils.
Abandonment: too much sweet and fat, animal foods, sweet alcohol.

Choleric: He has a hot temper, shows leadership qualities, is prone to hyperbole, emotional and outbursts of anger, is extroverted, but often uncontrolled. Suitable application: cooling and calming applications. Massages with thistle, almond and lavender oils.
Avoidance of: too much animal protein, alcohol, hot spices and fatty foods.

Phlegmatic: enjoyment is important to him. He is reliable, can accomplish things, but seldom initiate. To get going causes him problems when he “runs”, then persistently and with energy.
Suitable application: warming and drying applications, warm chest wraps. Abdominal massages with camelina oil, marigold ointment.
Abandonment: too much sweets, milk, whole grains, tropical fruits, pork, too many carbohydrates.

Melancholic: He is an admonisher and a thinker, appreciates beauty and intelligence, is more introverted. He tends to ponder and pessimism, struggling for an activity.
Suitable use: warm applications such as warm chest wraps and liver wrap. Clay in water in the morning relieves gastrointestinal discomfort. Massages with strengthening cedar nut oil.
No: Frozen food, raw food, hard to digest, too much salt and sugar.

Yes, much of this is dangerous nostalgic nonsense that would lead us straight back into the dark ages.

Do we need more of this in so-called alternative medicine (SCAM)?

TCM was created by Mao as a substitute for real medicine, at a time when China was desperately short of medicine. The creators of TEM have no such reason or motivation. So, why do they do it?

8 Responses to Traditional European Medicine: what is it and do we need it?