Mesotherapy: What is it? Does it work? Are there risks?

Mesotherapy is a treatment where fine needles or a high-pressure ‘gun’ are used to inject vitamins, enzymes, hormones, plant extracts, etc. into the skin of a patient. Michel Pistor, a French doctor, developed the therapy in 1952. It was originally used to relieve pain. Today, mesotherapy is also employed for a range of further indications:

Mesotherapy is said to deliver drugs into the middle layer (mesoderm) of the skin. It is claimed to correct underlying issues like poor circulation and inflammation that cause skin damage.

Many different drugs can be used for mesotherapy, including:

According to the Italian Mesotherapy Society, the mechanisms of action of mesotherapy can be summarised as follows: 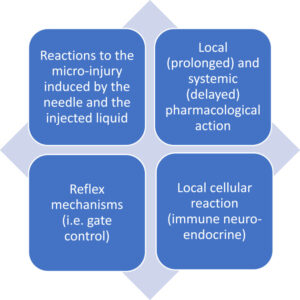 But is there at all any sound evidence that mesotherapy works?

It turns out that there are few rigorous studies. The most recent review concluded that mesotherapy proved to be more effective than systemic therapy in the treatment of local pain and functional limitations caused by a variety of musculoskeletal conditions. However, because of the heterogeneity of the analysed studies in terms of injected drugs, administration technique, associated treatments, frequency and total number of sessions, more randomized controlled trials are needed, comparing a standardized mesotherapy protocol with a systemic treatments.

Mesotherapy is not free of serious adverse effects. They include bacterial infections, hair loss, scarring, panniculitis, tissue necrosis, allergic reactions, and other complications.

So, is mesotherapy a treatment that might be recommended?

I think these facts answer the question fairly well.