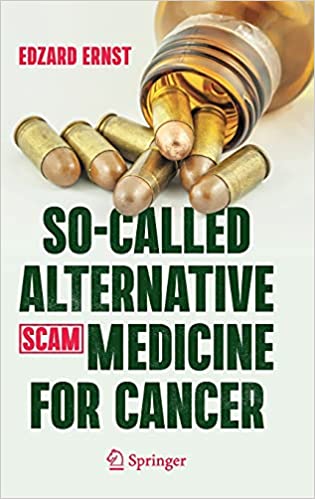 So-called alternative medicine (SCAM) for cancer is the title of my new book. I was informed that it has been published but, in reality, the hard copy might still take a few days until it is available (there were major problems at the proof-reading stage which caused a considerable delay). To give you a flavor of the book, allow me to show you my introduction; here it is:

In February 2013, my wife and I were in good spirits. I had recently retired from my post at Exeter University, and we were heading off to celebrate Danielle’s round birthday with her family in Brittany. There was just one thing that bothered us: Danielle had recurring abdominal pains. She had seen our GP in England several times about it. The last time, she had received a prescription for some antibiotics. I knew they would not help; her symptoms were not due to an infection.

After our arrival in France, things got worse, and Danielle consulted a gynaecologist at the out-patient clinic of the local hospital. More tests were ordered; an ultrasound showed an abnormality; a subsequent MRI revealed a tumour of the uterus. The gynaecologist advised to operate as soon as possible, and Danielle agreed.

The operation went well, but the gynaecologist, Dr Matthieu Jacquot, was concerned and said he had to be more radical than he had anticipated. The diagnosis was still uncertain until the results from the histology lab were in. A few days later, when we saw Dr Jacquot again, our hopes that all was fine were thoroughly dashed. He explained that Danielle had cancer of the endometrium and laid out the treatment plan which an entire team of oncologists had designed after an in-depth review of her case: a second, much more extensive operation, followed by six sessions of chemotherapy, followed by months of daily radiotherapy, followed by two sessions of brachytherapy.

Dr Jacquot could not have been more empathetic. He explained in detail what consequences all this would have. Danielle’s life would be dominated for the next year by a long series of treatments that were unpleasant to say the least. We were both shocked and close to tears.

Before arriving at a decision, we talked to friends and experts in this area. Opinions differed marginally. Two days later, we had made up her mind: we would stay in Brittany for the entire year and get Danielle treated exactly as Dr Jacquot suggested.

The second operation was much tougher than the first, but Danielle recovered well. Ten days later, she was back in our home and looked after by a nurse who came daily to change the bandages and give injections. On her third visit, the nurse broached the subject of chemotherapy which was scheduled to start soon. She explained how unpleasant it would be and what horrendous side effects Danielle was facing. Then she said: ‘You know, you don’t need to go through all this. They only pump you full with poison. There is a much better approach. Just follow the anti-cancer diet of Dr Schwartz.[1] It is natural and has no side effects. It would surely cure your cancer.’ When Danielle told me about this conversation, I informed the nurse that from now on I would myself take charge of the post-operative care of my wife and that her services were no longer required.

Today, Danielle is cancer-free. Had she listened to the nurse, she would almost certainly no longer be with us. But the lure of a ‘natural’ cancer cure with no side effects is almost irresistible. Faced with a serious diagnosis like cancer, most patients would consider any therapy that promises help without harm. Inevitably, they encounter a myriad of so-called alternative medicines (SCAMs), and many patients give SCAM a try.

In addition to Dr Schwartz’s cancer diet, there are hundreds of SCAMs that specifically target vulnerable cancer patients like Danielle. How can patients not be confused, and who might give them responsible advice? Conventional doctors rarely do. A recent summary of 29 relevant papers concluded that physicians will discuss complementary therapies only when a patient him/herself raises this issue within a consultation.[2] But cancer patients are often too embarrassed to ask about SCAM. Those who are courageous enough usually get short shrift. Many conventional doctors are not just critical about SCAM, but also know very little about the subject.[3]

Patients deserve evidence-based information, instead they often get unhelpful blanket statements from their GPs such as:

All of these are untrue. Frustrated by such erroneous platitudes, patients might go on the Internet for help where they are bombarded with uncritical promotion. We investigated the information on SCAM for cancer provided by popular websites and found that they offer information of extremely variable quality. Many endorse unproven therapies and some are outright dangerous.[4] Sadly, the advice patients might glean from newspapers[5] or health-food stores[6] tends to be equally misleading and potentially harmful.

Subsequently, some patients might visit a library and read one of the many books on the subject. If anything, they are even worse. We have repeatedly analysed the contents of consumer guides on SCAM and always concluded that following their recommendations would shorten the life of the reader.[7] To give you a flavour, here are a few titles currently on sale:

Cancer patients would, of course, all like to ‘outsmart cancer’; they are desperate and vulnerable. In this state of mind, they easily fall victim to anyone who sells false hope at inflated prices. The consequences can be tragic.

In 2016, the actress English Leah Bracknell, for example, raised ~£50 000 to treat her lung cancer in the German ‘Hallwang Private Oncology Clinic’. The SCAMs used there included homeopathy, micronutrients, natural supplements, whole-body hyperthermia, and ozone therapy, none of which cures cancer. If cancer patients fall for bogus treatments, they not just lose their money but also their lives. Leah Bracknell died of her cancer in 2019.[8]

It follows that there is an obvious and urgent need for an evidence-based text naming the SCAMs that are potentially harmful and discussing those that might be helpful.

My book is aimed at doing just that.

The publication of this book is perhaps the right occasion to publicly thank two regular and one occasional contributor to this blog. I am grateful to