A near-fatal consequence of chiropractor massage

A case report was published of a 35-year-old Chinese man with no risk factors for stroke. He presented with a 2-day history of expressive dysphasia and a 1-day history of right-sided weakness. The symptoms were preceded by multiple sessions of the neck, shoulder girdle, and upper back massage for pain relief in the prior 2 weeks. A CT-scan of the brain demonstrated an acute left middle cerebral artery infarct and left internal carotid artery dissection. The MRI cerebral angiogram confirmed left carotid arterial dissection and intimal oedema of bilateral vertebral arteries. In the absence of other vascular comorbidities and risk factors, massage-induced internal carotid arterial dissection was deemed to be the most likely cause of the near-fatal cerebrovascular event. 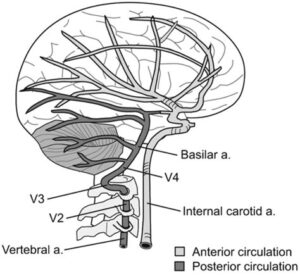 INSIDER reported further details of the case: the patient told the doctors who treated him that he had seen the chiropractor for two weeks before he experienced trouble reading, writing and talking. After experiencing those symptoms for two days and one day of pain on his right side, a friend convinced the patient to consult a neurologist. This led to the hospital admission, the above-named tests, and diagnosis. After three months of therapy and rehab, the patient showed “significant improvement,” according to the doctors.

What remains unclear is the exact nature of the neck treatment that is believed to have caused the arterial dissection. A massage is mentioned but massages have rarely been associated with such problems. Neck manipulations, on the other hand, are the hallmark therapy of chiropractors and have, as I have pointed out regularly, often been reported to cause arterial dissections.

Chiropractors usually deny this fact; alternatively, they claim that only poorly trained practitioners cause these adverse events or that their frequency is exceedingly small. However, without a proper post-marketing surveillance system, this argument is hardly convincing.

5 Responses to A near-fatal consequence of chiropractor massage