Spinal epidural hematoma after spinal manipulations: Report of three cases and a review of the literature

Spinal manipulation therapy (SMT) is widely used worldwide to treat musculoskeletal and many other conditions. The evidence that it works for any of them is weak, non-existent, or negative. What is worse, SMT can – as we have discussed so often on this blog –  cause adverse events some of which are serious, even fatal.

Spinal epidural hematoma (SEH) caused by SMT is a rare emergency that can cause neurological dysfunction. Chinese researchers recently reported three cases of SEH after SMT. 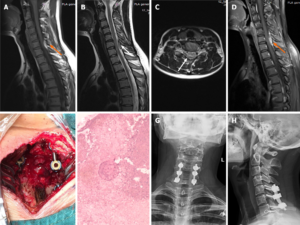 All three patients underwent surgery after failed conservative treatment and all recovered to ASIA grade E on day 5, 1 wk, and day 10 after surgery, respectively. All patients returned to normal after 3 mo of follow-up.

The authors concluded that SEH caused by SMT is very rare, and the condition of each patient should be evaluated in full detail before operation. SEH should be diagnosed immediately and actively treated by surgery.

These cases might serve as an apt reminder of the fact that SMT (particularly SMT of the neck) is not without its dangers. The authors’ assurance that SEH is VERY RARE is a little puzzling, in my view (the paper includes a table with all 17 previously published cases). There is, as we often have mentioned, no post-marketing surveillance, surgeons only see those patients who survive such complications long enough to come to the hospital, and they publish such cases only if they feel like it. Consequently, the true incidence is anyone’s guess.

As pointed out earlier, the evidence that SMT might be effective is shaky for most indications. In view of the potential for harm, this can mean only one thing:

The risk/benefit balance for SMT is not demonstrably positive.

In turn, this leads to the conclusion that patients should think twice before having SMT and should inquire about other therapeutic options that have a more positive risk/benefit balance. Similarly, the therapists proposing SMT to a patient have the ethical and moral duty to obtain fully informed consent which includes information about the risk/benefit balance of SMT and other options.

22 Responses to Spinal epidural hematoma after spinal manipulations: Report of three cases and a review of the literature