We have discussed Marma massage, we have repeatedly discussed acupuncture, of course, but we have so far never considered marmapuncture. The ‘British Institute of Marmapuncture‘ explains what it is:

Marmapuncture is traditionally known as Bhedan karma (meaning the action of piercing through) is a time tested therapeutic intervention, which treats the energetic body through an elaborate network of channels known as srotas.

Despite the widely held belief that Marmapuncture is a derivative of Chinese Acupuncture, that was popularised in 200-400 BC in text of the Yellow Emperor) modern archaeological evidence points to the fact that Suchi Bhaden, Shira Bhedan and Bhadhan Karma where practised in Sri Lanka well before this time. Finds discovered in caves in the Balangoda region of Sri Lanka, suggest there has been continuous habitation for over 37,000 years. Micro lithic tools were crafted from flint, fish bones and a type of rock known as Chert. These where used to penetrate the skin, which affected a therapeutic response in the body. 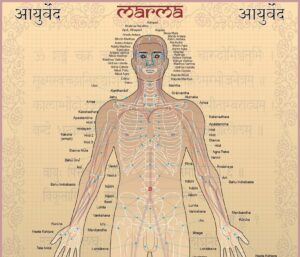 And why do I mention all this? Last weekend, I read the Guardian (3/7/2021) and there it was: a half-page article entitled MARMAPUNCTURE. THIS INNOVATIVE FACIAL TREATMENT IS MORE THAN SKIN DEEP. WE FIND OUT HOW IT IS USED IN AYURVEDIC MEDICINE AND PUT IT TO THE TEST. In the article, Mattie Lacey-Davidson had the treatment and found that marmapuncture (dubbed ‘natural Botox’) is not truly comparable to botox. Then Mattie mentioned a 2013 study that allegedly reported ‘promising results as a therapy for facial elasticity with evidence of skin tightening across the face’. I think I found the study; here it is:

Background. The use of acupuncture for cosmetic purposes has gained popularity worldwide. Facial cosmetic acupuncture (FCA) is applied to the head, face, and neck. However, little evidence supports the efficacy and safety of FCA. We hypothesized that FCA affects facial elasticity by restoring resting mimetic muscle tone through the insertion of needles into the muscles of the head, face, and neck. Methods. This open-label, single-arm pilot study was implemented at Kyung Hee University Hospital at Gangdong from August through September 2011. Participants were women aged 40 to 59 years with a Glogau photoaging scale III. Participants received five treatment sessions over three weeks. Participants were measured before and after FCA. The primary outcome was the Moire topography criteria. The secondary outcome was a patient-oriented self-assessment scale of facial elasticity. Results. Among 50 women screened, 28 were eligible and 27 completed the five FCA treatment sessions. A significant improvement after FCA treatment was evident according to mean change in Moire topography criteria (from 1.70 ± 0.724 to 2.26 ± 1.059, P < 0.0001). The most common adverse event was mild bruising at the needle site. Conclusions. In this pilot study, FCA showed promising results as a therapy for facial elasticity. However, further large-scale trials with a controlled design and objective measurements are needed.

As we see, it is neither a study of marmapuncture or a controlled trial. Its results are utterly meaningless. But is there any evidence at all to support the many claims made for marmapuncture?

Last question: who is Mattie Lacey-Davidson?

She is a blogger/influencer/content creator based in London.

5 Responses to Marmapuncture: innovative or disingenuous?