Cupping for Olympic swimmers. Or: why breaking your shoulder is not necessarily good for writing a successful book

“Working well for him…” That was the response to my tweet yesterday about cupping for Olympic swimmers. I had tweeted this picture showing one swimmer’s cupping marks (similar signs currently are currently being displayed by several competitors in Tokyo). 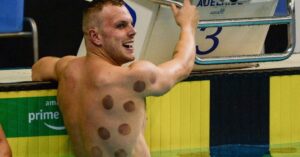 I had added to the tweet my post from 2018 which failed to show that cupping is an effective means of improving athletic performance.

The response ‘WORKING WELL FOR HIM..’ irritated me (not that it has the slightest importance) and made me think how prone we all are to find causal relationships where there are, in fact, none (which might have more importance). I feel that we must, as intelligent humans, do more to fight this reflex.

In 2008, just before Simon Singh and I published ‘TRICK OT TREATMENT?‘, I broke my left shoulder. It was stupid, painful, unpleasant, and most annoying. Yet, it coincided with a very nice publishing success: our book received plenty of praise and was translated into about 20 languages.

So, should we recommend to all authors who are about to publish a book that they break their left shoulder? I think we can probably agree that this would be absurd.

But why do many people who see the cupping-marked Olympic athletes think that cupping is WORKING WELL FOR THEM? I know, it is tempting to think that they know best, and they must have tested it, etc. But why not rather consult the evidence? Why not rather question the plausibility of cupping as a means to improve performance? Why not rather consider that athletes do all sorts of weird, irrational things that make them feel a little more secure?

Frankly, the evidence that breaking your arm makes you publish a decent book is just as sound as the evidence that cupping improves the speed of swimmers. My advice, therefore, is to resist quick thinking where slow thinking including asking probing questions and consulting the evidence is indicated.

5 Responses to Cupping for Olympic swimmers. Or: why breaking your shoulder is not necessarily good for writing a successful book