Beer is the main food source of isoxanthohumol, a precursor of 8-prenylnaringenin, the strongest phytoestrogen identified to date. As phytoestrogens are reported to reduce perimenopausal symptoms, this study evaluated if daily moderate consumption of beer with (AB) and without alcohol (NAB) could improve menopausal symptoms and modify cardiovascular risk factors.

A total of 37 postmenopausal women were enrolled in a parallel controlled intervention trial and assigned to three study groups: 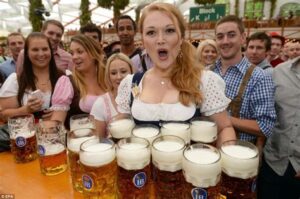 After a 6-month follow-up of the 34 participants who finished the trial, both interventions (AB and NAB) significantly reduced the severity of the menopause-related symptoms. Moreover, AB had a beneficial net effect on psychological menopausal discomforts compared to the control group. As the sex hormone profile did not differ significantly between the study groups, the effects of both types of beers (AB and NAB) are attributed to the non-alcoholic fraction of beer. Furthermore, moderate NAB consumption improved the lipid profile and decreased blood pressure in postmenopausal women.

The authors concluded that a daily moderate AB and NAB consumption may provide an alternative approach for postmenopausal women seeking relief from mild to moderate climacteric symptoms. Moreover, NAB was found to have a beneficial effect on LDL-C, ApoA1, and DBP measurements, all known risk factors for cardiovascular disease. However, these results must be considered as preliminary and will require confirmation with larger sample sizes.

The clinical implications of daily moderate AB and NAB consumption have been revealed in this study, but the mechanisms of action and impacts on sex hormones remain unknown. The most effective quantity of beer, with or without alcohol, that can be safely consumed by a postmenopausal woman still needs to be determined, taking into consideration factors such as age, genetics, and ethnicity.

I am impressed and only have this comment: let’s please not forget the male menopause …

and if they ever did a trial, can I please go in group AB?

One Response to Beer for Menopausal Symptoms? A (non-randomised) clinical trial