A Trial of Myofascial Release for Chronic Low Back Pain

Myofascial release (also known as myofascial therapy or myofascial trigger point therapy) is a type of low-load stretch therapy that is said to release tightness and pain throughout the body caused by the myofascial pain syndrome, a chronic muscle pain that is worse in certain areas known as trigger points. Various types of health professionals provide myofascial release, e.g. osteopaths, chiropractors, physical or occupational therapists, massage therapists, or sports medicine/injury specialists. The treatment is usually applied repeatedly, but there is also a belief that a single session of myofascial release is effective. This study was a crossover clinical trial aimed to test whether a single session of a specific myofascial release technique reduces pain and disability in subjects with chronic low back pain (CLBP).

A total of 41 participants were randomly enrolled into 3 situations in a balanced and crossover manner:

The subjects underwent a single session of myofascial release on thoracolumbar fascia and the results were compared with the control and placebo groups. A single trained and experienced therapist applied the technique.

For the control treatment, the subjects were instructed to remain in the supine position for 5 minutes. For the muscle release session, the subjects were in a sitting position with feet supported and the thoracolumbar region properly undressed. The trunk flexion goniometry of each participant was performed and the value of 30° was marked with a barrier to limit the necessary movement during the technique. The trained researcher positioned their hands on all participants without sliding over the skin or forcing the tissue, with the cranial hand close to the last rib and at the T12–L1 level on the right side of the individual’s body and the caudal hand on the ipsilateral side between the iliac crest and the sacrum. Then, the researcher caused slight traction in the tissues by moving their hands away from each other in a longitudinal direction. Then, the participant was instructed to perform five repetitions of active trunk flexion-extension (30°), while the researcher followed the movement with both hands simultaneously positioned, without losing the initial tissue traction and position. The same technique and the same number of repetitions of active trunk flexion-extension were repeated with the researcher’s hands positioned on the opposite sides. This technique lasted approximately five minutes. 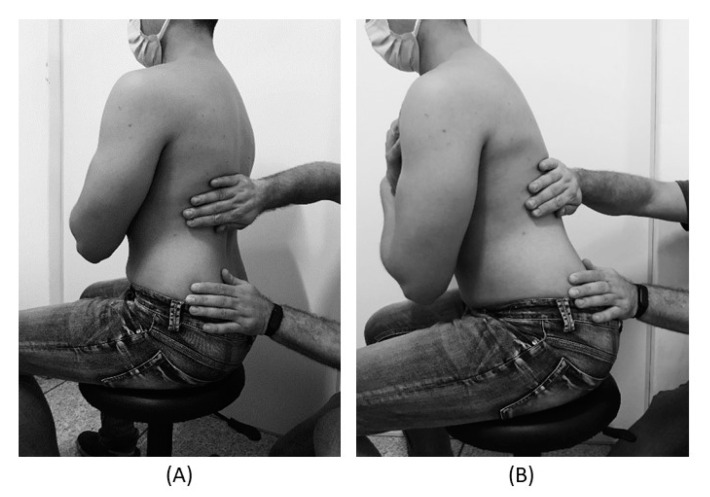 For the placebo treatment, the subjects were not submitted to the technique of manual thoracolumbar fascia release, but they slowly performed ten repetitions of active trunk flexion-extension (30°) in the same position as the experimental situation. Due to the fact that touch can provide not only well-recognized discriminative input to the brain, but also an affective input, there was no touch from the researcher at this stage.

The authors concluded that a single trial of a thoracolumbar myofascial release technique was not enough to reduce pain intensity and disability in subjects with CLBP.