According to one website, electromagnetic fields (EMFs) are “the new smoking“:

For decades, a group of cigarette companies referred to as ‘Big Tobacco’ financed bogus scientific studies claiming smoking was perfectly safe. This tricked doctors, scientists, politicians, and smokers into a false sense of security. There were early warning signs that smoking was dangerous, but it took 50 years for the government to finally take action. Today we’re facing an even bigger health threat… EMFs. Even if many doctors, politicians and Big Wireless still claim that EMFs are perfectly safe, the early warning signs could not be clearer:

The Atox Bio Computer is one of many devices marketed as the solution. It is a little device that supposedly protects any person who is gullible enough to buy it from electrosmog and other EMFs. It was developed by the Russian physicist, Alexander Tarasov. Worn around the neck, the device allegedly acts by “converting negative information into positive”. Alarmingly, the Atox is also promoted as protection against ionizing radiation. Pseudo-scientific explanations are given for the mode of action, in which there is talk of an ominous “energy-information component” of radiation: 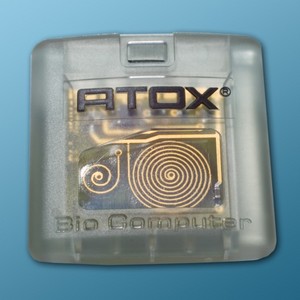 Sounds weird? Yes, I agree! But it must be true because it is supported by a real professor from a leading medical school. In 2007, it was reported in a press release that Prof. Dr. Michael FRASS examined the ATOX Bio Computer and found that 90% of people with too low and 100% with too high initial values achieved normalization of their vegetative performance. Altogether, 92.9% of the persons benefited by wearing the ATOX biocomputer. 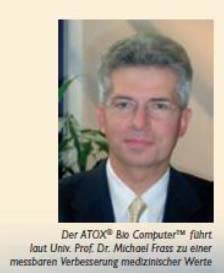 With regard to the ratio of sympathetic to parasympathetic impulses, 100% of the people with too low and 82.3% with too high initial values normalize their range of the total autonomic power. Overall, 84.2% of the treated individuals showed a positive course under the influence of ATOX biocomputer. According to Frass, this means that people with a high stress factor have a very high probability of returning to normal values of the autonomic system with the help of the ATOX biocomputer.

Considering the fact that such findings, if true, would necessitate to re-write large parts of the textbooks of physics and medicine, it is surprising that Frass does not include them in his CV. Perhaps he is a deeply modest scientist? Or maybe he does not want to spoil his chances for a Nobel?

Prof. Frass has, of course, featured on this blog before. For instance, because his many studies of homeopathy are invariably positive, or because his results have been shown to contain a few (pro-homeopathy) ‘errors’, or (most recently) because he published a trial of homeopathy that claimed lung cancer patients live longer if they are treated with homeopathy. The latter study is now under investigation for fraud.

Had such an investigation been initiated in back 2007 when Frass came out with his ATOX Bio Computer study (which incidentally was never properly published [at least I could not find it on Medline]), we would now not need to worry whether some desperate cancer patients did take Frass’ ‘science’ seriously.

5 Responses to The unfamous ‘Atox Bio Computer’ and the infamous Prof. Michael Frass