Germany has long been the ‘Promised Land’ for so-called alternative medicine (SCAM). For many years, about two-thirds of the general population has been reported to be regular SCAM users. Now, this seems about to change. A recent survey found that only one-third of Germans believe that homeopathy works as well as conventional medicine. The verdict on SCAM as a whole is similar: Only 35 percent of respondents would like SCAM to play a role in healthcare in addition to modern medicine. The results originate from an extensive representative survey commissioned by the GWUP and carried out by the KANTAR Institute to sound out attitudes toward esotericism and pseudoscience. The figure below depicts percentage figures of the belief in (from left to right) homeopathy, integrated medicine, spiritual healing, electrosmog, dowsing, clairvoyance, psychokinesis, ghosts, astrology, extra-terrestrials, none mentioned. 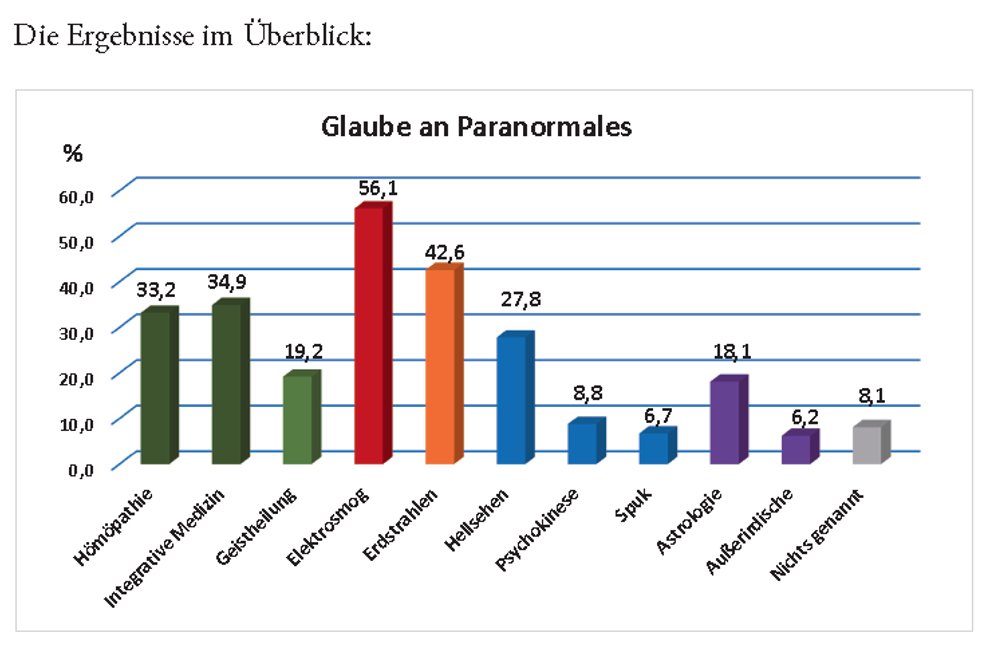 “It is a good sign for health care if two-thirds of the population reject dubious cures. The experience from the pandemic shows that we can only fight diseases with science and modern medicine,” stated Amardeo Sarma, chairman of GWUP. “I am pleased with the result because it also underlines the impact of our educational work. I’m convinced that we’re helping people make important decisions, removing uncertainty and, not least, preventing suffering caused by incorrect treatments.”

“As a physician, I am pleased when more and more people are concerned with their health and critically question promises of healing,” said Dr. Natalie Grams. “For me, the declining approval of homeopathy means that it is worthwhile to publicly stand by science and not be muzzled by industry interests. Fewer homeopathics mean more good medicine for patients that really works.”

This sounds like good news indeed. Yet, I think, we need to be careful and avoid jumping to conclusions because prevalence surveys are often not as reliable as they seem.

1) They frequently lack a clear definition of what is being surveyed. There is no generally accepted definition of alternative medicine, and even if the researchers address specific therapies, they run into huge problems. Take integrated medicine, for instance – some see this as alternative medicine, while others would, of course, argue that it is the integration of social and health care. Or take homeopathy – many consumers confuse it with herbal medicine.

2) The questionnaires used for such surveys are rarely validated. Essentially, this means that we cannot be sure they evaluate what we think they evaluate. We all know that the way we formulate a question can determine the answer. There are many potential sources of bias here, and they are rarely taken into consideration. It is therefore not surprising that different surveys report different prevalences. In Indonesia, for instance, an increase in SCAM use has been reported associated with the pandemic.

3) The typical survey has a low response rate; sometimes the response rate is not even provided or remains unknown even to the investigators. This means we do not know how the majority of patients/consumers who received but did not fill the questionnaire would have answered. Often there is good reason to suspect that those who have a certain attitude did respond, while those with a different opinion did not. This self-selection process is likely to produce misleading findings.

4) The typical survey has a long list of questions and reports only those results that the investigators find interesting or pleasing. Such selective reporting can introduce a significant bias that may not be detectable for the reader of the report.

I am sure the new survey is not seriously affected by any of these drawbacks. After all, it is from the GWUP, the Society of the Scientific Study of Para-Sciences. If they are not able to do good science, who is?